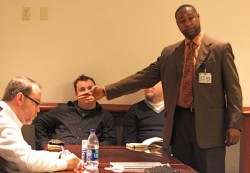 The vindication of the Eagle 8 continued on Thursday as the Atlanta Citizen Review Board recommended sanctions against two police officers involved in the raid and sustained a complaint that one of the men was falsely arrested.

The action came during the first public airing of more than a dozen complaints filed with the ACRB in the wake of the Sept. 10 raid by the Atlanta Police Department. Eight men were arrested, though all but one of those men were cleared in a March trial when the charges were dismissed or dropped.

On Thursday, the review board sustained a complaint from David Shepherd, a manager at the Eagle who was not working the night of the raid but was removed from an apartment over the bar and arrested. He filed a complaint with the ACRB that was the first the board considered; several others are expected to be reviewed in the coming months.

In addition to upholding Shepherd’s complaint, the board also recommended that interim Police Chief George Turner suspend Sgt. John Brock (bottom photo) for three days and issue a letter of reprimand for Sgt. B.E. Bridges (top photo). Both men were involved in the raid and testified during the Eagle 8 trial in March. During the trial, Bridges was identified as the lead investigator in the case. 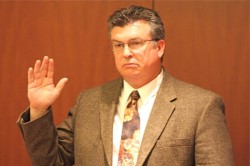 Both Bridges and Brock have faced a litany of complaints filed against them over the years, though Bridges has been suspended several times for incidents that included alcohol, according to the GA Voice. Bridges testified during the Eagle 8 trial that he bought four drinks at the Eagle the night of the Sept. 10 raid, but only sipped each one briefly before throwing them away.

During the trial, Bridges could not identify or misidentified several of the Eagle 8 defendants, including Shepherd. His spotty testimony, along with the sometimes derisive testimony from Brock, contributed to the collapse of the city’s cases against the men that were arrested.

Bridges also said during the trial that he did not make nor hear other officers using anti-gay slurs, as patrons of the bar have alleged. Brock repeatedly said dancers at the bar were wearing “diapers” and not underwear.

“If you want to call it underwear. It looked to me like a diaper,” Brock said. Later he added, “It was either underwear bunched up or it was a diaper.”

The criminal case against Shepherd was one of several that were dismissed before the end of the March 11 trial. Three other men were found not guilty. An eighth man charged in the raid did not appear in court and faces a bench warrant for his arrest.

In addition to complaints filed with the ACRB, the police department also launched an internal investigation – which remains open nine months after the raid – and patrons at the bar filed a federal lawsuit. Shepherd is a plaintiff in the lawsuit.