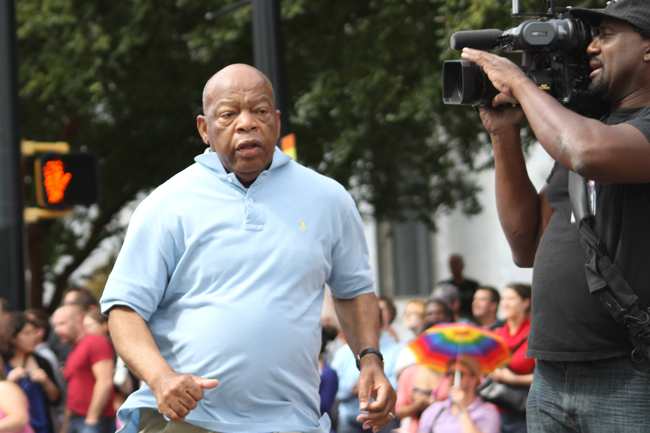 Hey Brandon White, hear that phone ringing? It might be U.S. Rep. John Lewis calling. The civil rights icon spoke out about White’s beating, plans to attend a Saturday rally and will soon call the 20-year-old to offer his counsel.

Lewis knows a thing or two about being attacked and beaten by bigots. So it’s no surprise that the staunch supporter for LGBT equality — and Atlanta Pride parade shuffle master (photo) — spoke out Friday against the anti-gay attack. A group of gang members attacked White on Saturday, beat and kicked him, yelled anti-gay slurs, recorded the incident and posted it to a hip hop website.

On Friday, Lewis condemned the attack.

“There is not any room in our society for any crime against any citizen simply because of individual differences. All human beings are made by the same hands, so no one has the right to demean, humiliate or beat down another individual because he or she is different. We should begin to see difference as an opportunity to grow, to understand something that is new to us, not as an invitation to violence.”

“Atlanta is the home of a historic movement that was centered upon respect for the dignity and the worth of every human being. We have a responsibility as the citizens of this great city to teach our children that history, to pass on the legacy of peace, the way of love and non-violence.

“It is tragic that the perpetrators have found themselves in a world of trouble, and I hope they will come to understand that violence is not the answer. I have reached out to the victim of this brutal encounter to offer my support and am making arrangements to meet with Brandon White in the near future.”

On Saturday, LGBT activists are holding a rally outside the McDaniel Street store where White was attacked. Rally – Communities United for Safety is scheduled for 10 a.m. At 1 p.m., the Evolution Project is hosting We Stand with you! A Forum on LGBT Violence! Organizers of the rally said Friday that Lewis plans to attend the event. Lewis told WSB-TV on Friday that he plans to call White in the coming days to offer counsel and support.

Earlier Friday, rally organizers also said they invited Mayor Kasim Reed, who has joined with Crime Stoppers to offer a $15,000 reward for tips leading to an arrest in the case. A later media advisory did not mention Reed. A spokesperson said the mayor is traveling and may not be able to attend the event.