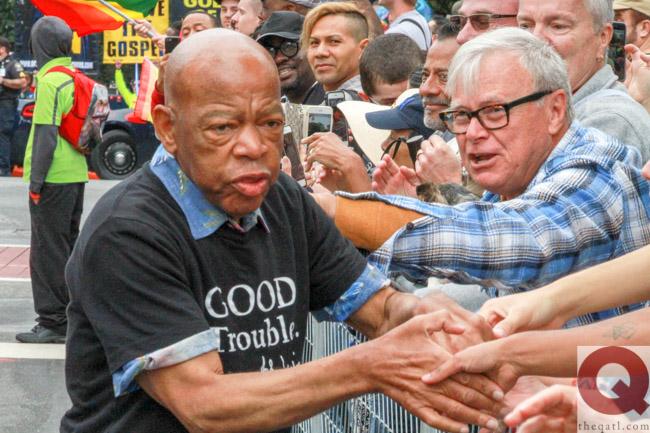 U.S. Rep. John Lewis wants to address a shortage in the number of doctors, nurses and other medical professionals who fight HIV by providing them up to $250,000 in student loan forgiveness.

“We need to support all our brothers and sisters who are living with HIV/ AIDS,” Lewis said in a press release. “Their lives are precious, and policymakers must ensure that there are enough qualified, dedicated health professionals to care, support and provide guidance for them. “

“Congress must continue to do our part to end HIV in the United States, and the HELP Act moves our country in the right direction. We are in this together,” he added.

The HELP Act would provide up to $250,000 over five years in loan repayment to physicians, nurse practitioners, physician assistants and dentists who provide HIV treatment in areas where there are shortages of those professionals, or at Ryan White Program-funded clinical sites.

The HIV Medical Association (HIVMA) and Atlanta HIV expert Melanie Thompson worked with Lewis’ office for more than a year to develop the HELP Act, according to Thompson.

“Swift passage of the HELP Act will be critical to reverse HIV workforce shortages here in Atlanta, in rural Georgia and throughout the South, which is now the epicenter of the epidemic while our Southern HIV workforce is stretched beyond thin,” Thompson said.

“Rep. Lewis’ commitment to tackling these issues has been unwavering and now, with his HELP Act, we have the opportunity to make real headway in the South and throughout the U.S. as we work toward ending HIV as an epidemic,” she added.

Thompson is interim chair of the Fulton HIV/AIDS Prevention, Care & Policy Committee and principal investigator for the AIDS Research Consortium of Atlanta. She is also a former HIVMA board chair.

The shortage in HIV clinicians creates “critical access issues,” according to HIVMA Board Chair Judith Feinberg.

“The HELP Act seeks to boost the number of HIV health care workers by repaying often devastating student loans, enabling new health practitioners to work in areas with high need that include the South and rural states such as West Virginia, where we are seeing HIV outbreaks due to the epidemic of substance use disorders,” she said.

Lewis helped Fulton officials unveil an ambitious plan to end HIV in the county in 2016.

“Every day too many people lose their lives to this disease,” he said at the time. “In Fulton County, in Georgia and in America itself, we can no longer be silent. We have to speak up and speak out – make a little noise.”

Lewis announced in December that he is fighting Stage 4 pancreatic cancer. He will continue his duties in the U.S. House while undergoing treatment.