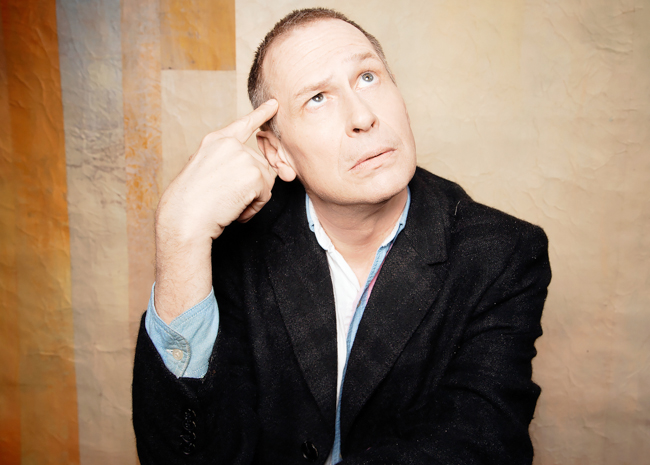 Scott Thompson spent the ‘90s being the most fearless queer in comedy. As a member of the venerated comedy sketch troupe The Kids In The Hall, his character “Buddy Cole” became a comedy icon. Buddy’s time has come again, and it’s coming to Atlanta this week.

At a time when all the queer comedic representation in sketch comedy featured straight people acting like gay people, Thompson was our man on the inside – a queer playing up the queer identity to read the heteronormative power structure while looking good doing it.

Buddy was a flaming beacon of queer comedic sensibility, and Thompson’s one-man show Apres le Deluge: The Buddy Cole Monologues shines it again on June 14 at City Winery. We catch up with Thompson to find out about the tour, how Buddy came to be, why he's a “gay pariah,” and the state of queer representation and visibility.

What inspired you to resurrect Buddy Cole for this show?

It felt like the times were right. It just felt like the world had become very, very polarized. It's a real time of enormous change. Political correctness is really strangling popular culture, and those are all kinds of things that Buddy flourishes in.

Wasn’t that sort of what was happening when Buddy was introduced?

Yes absolutely. To me, it's a very similar time to the late ‘80s and early ‘90s when “The Kids In The Hall” were in their heyday. That kind of paralyzing political correctness in society today was was huge back then, and then it disappeared, as this will.

“The Kids In the Hall” were constantly in hot water from all sides like people are today left and right, and we thrived in it in a way. We were always in trouble, always pushing the buttons, and people were furious on every side.

I thought, well, this is perfect for me. It's perfect for the “The Kids In The Hall,” and it is definitely perfect for Buddy. Especially now as a middle aged white guy, you're not supposed to be able to say anything, but I'm “Buddy Cole,” and I can say whatever I want, and that's exciting. It's a real super power for a white man to have right now.

What is the meaning behind the title the show, ‘Apres Le Deluge’?

It means in French “after the flood,” so it is a reference to Marie Antoinette who said just before her head was cut off. “Après moi, le déluge”, which means “After me, the flood.” When the French got rid of the aristocracy, they thought they'd solve their problems, but all they'd done was exchange one problem for another. She was saying, ‘Yes, we may be the devil, but we're the devil you know, and when you get rid of us, all hell will break loose.” And that's what happened.

So that's it. And it's also a nod to Buddy’s French heritage because he's half French. And it's also a third nod to “The Kids in the Hall.” Once it ended, it was like watch out, because now that shit's going to hit the fan. So that's what it's about

It's the 20th anniversary, and when it was released in 1998, no one paid any attention. It was the thing that I'm most proud of in my career, but officially it got nothing. No one reviewed it. No one talked about it.

I think people were shocked by it. First of all, homophobia 20 years ago was so much worse, and gay people didn't want to talk about it because at that time I was kind of a gay pariah and “Buddy Cole” was a gay pariah. No one was going to give Buddy any love on the gay side.

Gay pariah? To so many queer comics, you were an icon!

That’s absolutely wonderful to hear, and I love that, but those people you are talking about, you are comedians, but in terms of the greater population no, and until this day, I was never huge in the gay community.

I was never recognized by any of the gay organizations or groups. I was kind of written out of history and I had a lot of bitterness of that for many many years. Now I’ve dealt with it. I've had a lot of therapy to deal with it.

Do you think part of it was because Buddy was effeminate and not some masculine role model?

That’s crazy. That's exactly what I loved about him – that you a gay man got to be this character that could ooze queerness, be nelly and fey, and still be powerful and smart and hilarious.

Absolutely. Gay men are in such denial. hey they just refuse to accept the way we really are. You know what I mean? Most gay men don’t think they read gay, which is nonsense. Most gay men do.

And I think they look at Buddy Cole and see themselves, and they are ashamed. So I think Buddy Cole really exposes that self loathing that we still carry to this day.

I mean you've said that all these comedians are consider Buddy an influence, and I'm very very grateful for that. but let's be honest. It's 2018, and there is still not a major gay male comedy star in the world.

What do you think is at the core of that?

Buddy Cole was in many ways just the queen in me escaping and going “You can't keep me down forever.”

I met a guy that I had an affair with, and he broke my heart, and he was a very effeminate man. Almost the most feminine man I'd ever known. I thought, “Wow he's so feminine, and yet I find it attractive. It’s amazing.” I realized that his femininity was quite powerful.

A version of this article originally ran in Q magazine. Flip through the full digital edition below, and pick up your hard copy around town.