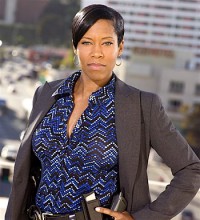 The cop drama “Southland” has distinguished itself not only with its rough edges but its ground-breaking, non-stereotypical gay character. We caught up with one of the show’s stars as it moves to TNT on Tuesday.

The series developed a strong following on NBC last spring, and the network green-lit a second season. But after looking at the first four episodes, NBC reversed its decision and canceled the show instead, calling it too dark for its proposed 9 p.m. time slot.

“Southland” was picked up shortly after by TNT (Comcast 41 in Atlanta, Channel 841 for HD digital subscribers), much to the satisfaction of its fans. It begins airing Tuesday with a commercial-free airing of its initial episode. 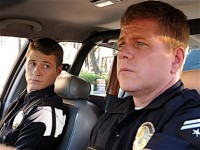 Michael Cudlitz (with McKenzie, second photo, right) stars as Officer John Cooper, a tough-talking, by-the-book cop who is subtly revealed as gay. With no prior clues, we see him at a gay bar at the end of the first episode chatting with another guy.

King was in Atlanta last week for a screening of an upcoming episode and took a few minutes to gab about the show, its move, and its multi-faceted characters. She admits that the cast and crew were caught off guard when NBC canceled the series, especially after initially renewing it.

“We were disappointed and surprised,” she says. “It resembled a break-up that wasn’t expected. We didn’t see it coming.”

The disappointment was short-lived, though, as TNT showed interest. 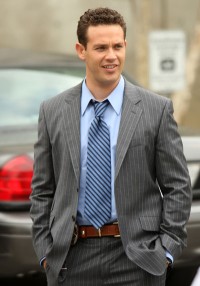 “I was elated,” she says. “It’s funny. I have emails that cast mates can show you. When we found out we were canceled, I said a week after, ‘Don’t worry, we’ll wind up in a place that cares about one-hour dramas.’ And it ended up happening. I never thought it had died or that it was over.”

The actress has a lot of respect for her character of Lydia Adams, the show’s only African-American character.

“I like her honesty,” King says. “She is compassionate, but not a pushover. She is a person who does things by the book. I like the complexity she has. I really like the fact that she is not just identified as a mother or a wife.”

The Lydia character is in a field populated mostly by men.

“All the women who are in law enforcement know the story, that they are in a field dominated by men,” the actress says. “They know some men aren’t as supportive as other men are. Lydia has a huge burden by being one of the only women in the department. She dedicates so much of her life to that, but her real burden is outside the department – inside is where she feels safe.”

One of the things King admires about the series is its matter-of-fact nature. Lydia is a dedicated detective who happens to be a woman and African-American. John Cooper happens to be gay.

“It should be like that,” King says. “Unfortunately, it is not regarded like that in any way other than entertainment industry. John is a cop first and his sexual orientation should not matter. That is the beautiful thing. Like my color, it should not make a difference in how we do our job, how we are regarded.

“My character mirrors John Cooper,” she continues. “We both love our job; we do everything by the book. We feel there is a brotherhood or a sisterhood behind the badge, and we don’t take that lightly. But we are not happy in home lives. There are a lot of parallels, and all those things trump being gay or black.”

The actress admits she is aware that she has gay fans.

“Sure, I would say that I do,” she says. “My characters are strong, and they don’t take shit and they speak their mind. Gay men appreciate that.”

She endeared herself to gay fans during the filming of “Miss Congeniality 2,” playing Sandra Bullock’s bodyguard.

“That was a fun ride,” she recalls. “Every time a Tina Turner song came, my character would be on stage singing.”

The series “227” was the first big break for the actress when she was still a kid. After films such as “Friday” and “Boyz n the Hood,” she made a big breakthrough as Cuba Gooding’s wife in “Jerry Maguire.” Since then, she has made memorable turns in such films as “Ray,” “How Stella Got Her Groove Back” and “Enemy of the State.”

King looks forward to the growth of “Southland” and seeing the arc of her character. She thinks cable television is an ideal place to develop and nurture shows.

“Talk to everyone out there and ask what their favorite one-hour show is, and two out of three will be a cable network show,” she says. “Regular network TV, not that much. Thank goodness for cable TV.