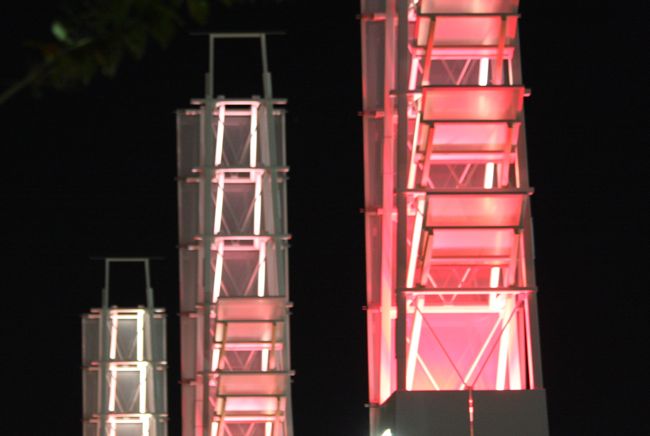 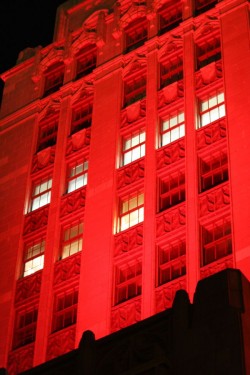 In press materials touting Reed’s press conference on the steps of City Hall and again in the remarks he delivered, Reed said the city was one of more than 30 across the country to take part in Red. The effort hoped to illuminate iconic landmarks across the globe to raise awareness for reducing babies born with HIV.

“World AIDS Day and our participation in it is critical because it renews focus on the subject and encourages people to get informed, to get tested, to get involved,” Reed said during the appearance.

But a post-sunset check of the Atlanta landmarks on Dec. 1 showed that only two – City Hall and the plaza towers – were turned red as the mayor pledged. There were no discernible signs that the other three buildings – the Dome, Centennial Park and World of Coca-Cola – were turned red.

A spokesperson for Reed, contacted after World AIDS Day, said the buildings reported back that they did take part in the Red effort despite an inspection that showed otherwise.

View a slideshow of landmarks across the globe that turned red for World AIDS Day.

UPDATE: A spokesperson for the World of Coca-Cola confirms that the building was not bathed in red. In fact, they don’t have that ability. But the landmark did turn its 30-foot tall Coca-Cola bottle red during the evenings of Nov. 30 and Dec. 1. An agreement with neighbors keeps the bottle icon dark after midnight.

UPDATE II: A spokesperson for the Georgia World Congress Center Authority — the group that manages the Dome, adjacent International Plaza and Centennial Olympic Park — says that eight to 12 lights around the Drum Wall on the exterior of the Dome used red gels. In the park, they used red LED lights to illuminate seating walls at Googie Burger and the Fountain of Rings. As we report above, the red lighting at the fountain was not visible to us.