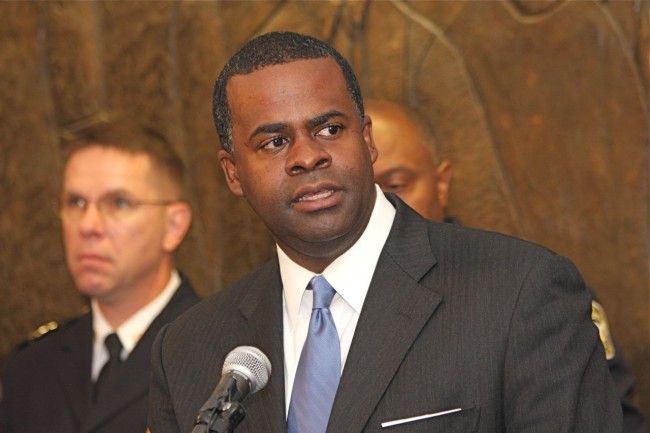 Mayor Kasim Reed took a week to respond publicly to two reports about the city’s botched Atlanta Eagle raid, offering his shock but no specifics on what, if any, action he will take next.

Reed’s office released the much-delayed reports after 10 p.m. on June 28, a day after a deadline imposed by a federal judge. Reed offered no comment, deferring to a prepared statement from City Attorney Cathy Hampton. The reports detail how the raid was mishandled by the Atlanta Police Department and city attorneys, and sustained 42 violations of the police department’s operating procedures, including 10 officers who lied about their actions during investigations into the raid.

Two days later, police Chief George Turner took aim at those officers, demoting a major and placing seven of the 10 who lied on administrative duty pending the outcome of a disciplinary review. Two others were fired after the raid for unrelated reasons; another office – one of the architects of the raid – is already suspended over his arrest for DUI and marijuana possession.

On Tuesday, Reed expressed his shock over the specifics of the two reports, one from high-powered law firm Greenberg Traurig and the other a long-stalled internal investigation by Atlanta police.

“I think any normal person with ordinary sensitivities would have to have been shocked by this report. And I was certainly was shocked,” Reed tells the GA Voice.

Reed’s shock comes despite court documents in the $1.025 million settlement of a federal lawsuit over the raid detailing how city attorneys and police ignored court-imposed deadlines, destroyed evidence and delayed discovery in the legal matter. The Atlanta Citizen Review Board also documented the misdeeds of the raid as it investigated the incident and complaints of police misconduct and anti-gay behavior.

“We can’t have a city like ours that has a history of embracing and celebrating inclusion and have such an important group of our citizens under this kind of threat. And I’m not going to allow it to stand,” Reed says in the interview.

Reed offered no specifics on what he’ll do next, little insight into the missteps the reports unearthed, and declined to comment on whether officers involved in the raid would be terminated. In the interview, the mayor also resorted to reciting sound bites about the raid he’s used in the past, including that the incident “happened before I was elected mayor.”

Reed made the same statement in January 2010 during his press conference after taking office. Yet a federal lawsuit filed over the raid continued under his watch for nearly a year before his administration settled it. The police department’s internal investigation dragged on even longer.

Reed apologized for the raid in a tightly-scripted public appearance after he inked the $1.025 settlement of the federal lawsuit in December, but only to those Eagle employees and patrons who sued. Reed has also complained in the past that the raid was overshadowing the accomplishments of his administration on LGBT issues.

Reed’s response to the Eagle reports, though, was slightly less tardy for the Eagle party than that of his predecessor, Mayor Shirley Franklin, the city’s top official when the Sept. 10, 2009 incident took place. She commented about the raid more than a week later – after a reporter bumped into her at a Home Depot in Midtown.