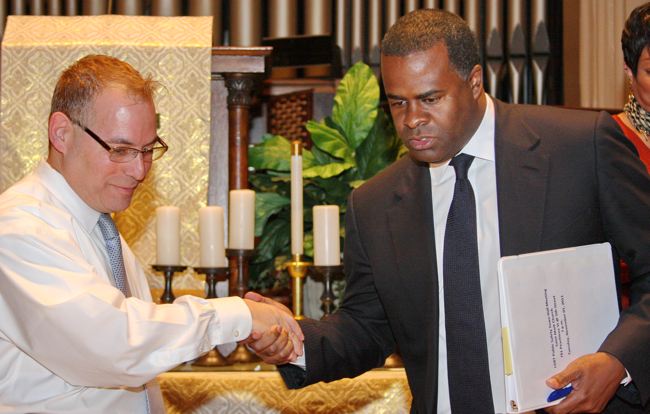 The sequel to the sequel – Eagle Raid Town Hall 3.0 on Tuesday – provided more than the drama lacking in the first two installments. It also signaled a willingness from Mayor Kasim Reed and his gay critics to bring the legal wrangling to an end so the healing can begin more than two years after the gay bar raid. The session alternated between conciliatory and contentious, and provided the expected – a handful of angry activists willing to question Reed and interrupt his responses, a mayor at times exasperated that his long record of supporting LGBT issues is being overshadowed by the raid, and queries among the 25 questions that sidetracked the main issue on the agenda. But the sequel also broke new ground: An offer from gay attorney Dan Grossman, the legal force behind the Eagle raid lawsuits, to meet with Reed, address some remaining concerns about the Atlanta Police Department, bring the legalities to an end and allow the lingering hurt over the 2009 raid to transform into healing. “I think the court is the worst place to resolve these problems,” Grossman said near the end of the nearly two-hour town hall. “I encourage us to sit down, as well as other attorneys. It is time for some healing. It is time for a bunch of people who love the city in their own ways to make something constructive happen.” Reed agreed and Grossman quickly followed up: “Let’s have lunch.” But if you ditched Eagle 3.0 for the drama of “Glee,” here’s some other takeaways from Tuesday’s public reckoning: 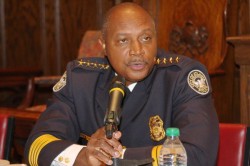 • So much for Eagle raid fatigue. More than 100 people attended – more than the Eagle raid town halls in October 2009 and July 2010. The crowd included several gay Atlanta police officers, top administrators from Reed’s administration, state Sen. Vincent Fort, state Rep. Simone Bell, former City Council President Lisa Borders and current City Council members Alex Wan, Michael Julian Bond and Ivory Young. • Reed, fond of accurately pointing out that the Eagle raid took place before he took office, made the claim again – about a half-dozen times, in fact. But Reed was also quick to tick off what he’s done to address the wake of the raid since taking office in 2010, including meeting the terms of the settlement last year in the federal lawsuit over the raid. “I believe the conditions of the consent decree have been met,” Reed said. He added that he would order City Attorney Cathy Hampton, who was in the audience, to ask for a settlement conference before the federal judge overseeing the case, video tape it and post it online for public consumption. “That is the way we can resolve it so we can stop having an argument about where we are,” he added. • City attorneys pushed Reed against settling the federal lawsuit over the Eagle raid, advising him to stall until the two-year statute of limitations expired to quash any additional litigation. “I thought the Eagle case needed to be brought to a close to help the city heal,” Reed said. • There’s little Reed’s administration can do to stop the six officers fired for lying and other misdeeds during a post-raid investigation from regaining their jobs. Some of the officers have appealed their discipline to the Civil Service Review Board, a process Reed and police Chief George Turner (second photo) say has been in place for years. “We have had the most severe discipline issued in the Atlanta Police Department that has occurred in 10 years. The discipline around the Eagle raid is more severe than the discipline issued around the [2006] death of Kathryn Johnston,” Reed said. “We are continuing to do more.” • Laura Gentle, who helped organize rallies after the Eagle raid and has taunted Reed before, challenged Reed on why he hasn’t done more to address the “deep-rooted homophobia” that led to the raid. The exchange was the most heated of the night with Reed. “I am not going to make a blanket statement that the City of Atlanta government is homophobic. I am not going to stipulate that,” Reed said. “I think it is unfair for you to judge me for events that didn’t even occur when I was here. I have been doing every single thing I can to bring this to a conclusion and you stand there and cast aspersions on me.” • The police department’s nearly 1,800 officers have received gay-inclusive sensitivity training and instruction on criminal procedures, both items called for in the settlement of the federal lawsuit over the raid. “We had to talk to every Atlanta police officer about every new Standard Operating Procedure that was initiated because of the Atlanta Eagle case,” Major Jeff Glazier said. Pressed about his agency’s gay inclusiveness, Turner offered this: “You will find a diverse department that is second to no police department in this country.” • The issues of homeless gay youth surfaced, which led Reed to say he would dispatch an administration official to a Wednesday meeting by the Atlanta Sisters to discuss the issue. Reed also asked for “advice and help” to address homeless gay youth as the city works with local banks to use foreclosed and vacant homes to house those without shelter. “Right now is the time to have the conversation. We are moving forward with supportive housing in the City of Atlanta. I am open. I just need advice on the path forward,” Reed said. 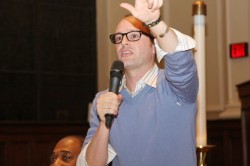 • Atlanta police videotaped the arrests of 52 Occupy Atlanta protesters last week, and photographed those who were jailed with the officer that arrested them. That would make it easier to identify any rogue behavior by officers, something that didn’t happen during the Eagle raid and made it difficult for patrons inside the bar to identify officers that made anti-gay statements and physically mistreated them. “When you talk about the amount of force we used, we had police helicopters and we had mounted patrol because we wanted to handle our situation peacefully. You do not ramp up in the middle of a crisis,” Reed said in defending last week’s clearing of protesters from Woodruff Park. • The Eagle raid has caused pain for Reed, too, but it’s leading to positive change. “I want you to know that there are things that happened as result of the Eagle … that are leading to real change,” Reed said. “As hard as this has been for you all and as hard as it has been for me, I think it is worth it. In the end, I think we will end up with a better place and a better city.” • Holding the town hall at Saint Mark United Methodist Church provided an ideal backdrop for turning the Eagle hurt to healing. “I hope this heartens the cynical folks that didn’t come tonight,” Rabbi Josh Lesser said about the forum. Josh Noblitt (bottom photo), a Saint Mark minister and member of the LGBT police advisory board, asked the Eagle raid patrons to consider forgiveness. “I want to ask those that were involved in the Eagle raid, the victims, to look inside and examine whether is some room for forgiveness for the officers that caused some pain for you. My concern is for you all and your well being,” Noblitt said. Top photo: Mayor Kasim Reed is greeted by Glen Paul Freedman, chair of the Atlanta police LGBT advisory board, when he arrived at the town hall meeting on Tuesday.