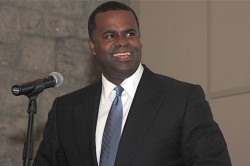 Mayor Kasim Reed announced the creation of a blue ribbon commission of LGBT attorneys to reach a “just and right” end to the federal lawsuit facing the city and its police department over the botched raid of the Eagle.

“I want you to know that I have heard loudly and clearly that there is unfinished and painful business between the [Atlanta Police Department] and the LGBT community,” Reed said. “I have heard that the kind of mutual trust I wish to establish will be difficult as long as the legal battle around the Eagle bar hangs over us. I intend to bring an end to that.”

Reed said he told his city attorney Thursday that he planned to form the panel to act as an intermediary between the attorneys who filed the lawsuit and the city to hold “honest and sincere conversations” to reach a “just and right” resolution to the lawsuit, which has grown increasingly acrimonious in recent weeks.

Earlier this month, attorneys who filed the lawsuit accused the city and the Atlanta Police Department of ignoring court-imposed deadlines, destroying evidence, failing to maintain evidence and delaying discovery in the matter. Reed said last week that the city will investigate the allegations and, if true, take action to address them. But a day later, city attorneys denied the charges and said they hadn’t impeded the discovery process.

On Monday, former Mayor Shirley Franklin said mistakes were made in the raid, which took place during her administration.

“I believe months of litigation and accusations will do far more damage to both the LGBT community and to the City of Atlanta at a time when we are really poised to make great strides as a unified, cohesive community,” Reed said Thursday.

Reed’s announcement included few details about the blue ribbon commission, how it will be empowered to mediate, the number of members or whether Reed will be involved. The mayor did name four members of the commission – LGBT attorneys Lawrie Demorest, Jeremy Burnette, Burton Tillman and Lee Schrader – but declined to answer questions about the panel after his announcement.

“I’ve asked some of Atlanta’s respected and distinguished legal minds to assist me by serving on a blue ribbon commission that I will ask to help me bring resolution to this lawsuit. This panel will not be limited as I am by the primary fiduciary duties tied to my office as mayor,” Reed said.

Attorneys who filed the lawsuit reacted with cautious optimism that the panel will help bring an end to the legal matter, which was filed nearly a year ago.

“I guess we have to first find out what he’s actually empowering them to do — what their mandate is, how much freedom they will have, what he is expecting of them,” said Daniel Grossman, who was on hand for Reed’s announcement. “But I do wonder where was his concern a year ago. Why did the mayor allow this debacle of a case to develop under his watch when he so easily could have prevented it at no cost to the city? He hasn’t answered that yet and I can’t imagine what that answer is.”

Grossman has said that Reed and city attorneys rebuffed attempts earlier this year to settle the case.

Greg Nevins, an attorney in the Southern Regional Office of Lambda Legal in Atlanta who also attended Thursday’s awards dinner, said the panel could be the first meaningful overture from the city concerning the lawsuit.

“We have a situation where no one thinks the right thing was done there. We have a case that no one really wants to see drag out,” Nevins said. “Hopefully there is an edict, a sort of mission to go forward and find a solution and work towards that end. That would be a positive thing.”