Record LGBTQ inclusion at heart of #TeamBiden campaign in Georgia 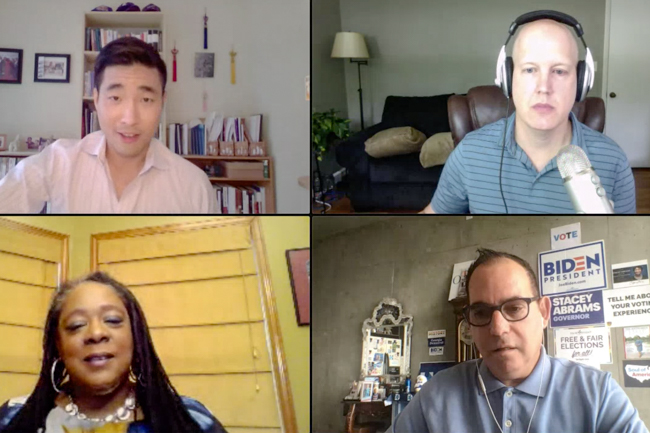 Some 15 Georgia delegates to last week’s Democratic National Convention identified as LGBTQ, and still more sit on the state campaign staff for Joe Biden’s run for the presidency.

It’s an unprecedented score for diversity, even for the Democrats, said Glen Paul Freedman, one the Georgia delegates to the DNC last week and the CFO-COO for Fair Fight Action and Fair Fight, the voting-rights coalition based in Atlanta.

“As an out gay man, this convention showed me how much Democrats see us as human beings, show us that we are important and part of the process,” Freedman said. “We were not only mentioned but highlighted.”

Freedman’s insights were among the revelations during the most recent episode of Q Conversations, Project Q’s live virtual Q&A series. In addition to Freedman, the session included state Rep. Sam Park who spoke during the DNC convention, as well as former state Rep. Simone Bell, who is a senior adviser to the Biden-Harris campaign in Georgia.

The discussion, from the convention to the coronavirus, from the electorate to the election, took place on Friday. You can watch it below and here.

The high LGBTQ headcount represented extraordinary inclusion, according to the Q Conversations panelists. The Democratic embrace of diversity became a major theme of the session, and all three guests mentioned the virtual rollcall as one of the most telling moments of the convention.

“I really loved the roll call and seeing the diversity across America,” said Bell, who was the first African-American lesbian elected to a state legislature in 2009. “I was excited about it, and I hope this is something we continue.”

Park, who also made history as the first gay man and first Asian elected to the Georgia legislature in 2016, was part of a montage of “rising star” Democrats during the convention. You can watch Park’s DNC segment here.

The lawmaker agreed with Bell and took the concept of diversity further, setting Democrats apart from Republicans.

“It highlights how the Democratic Party represents the diversity of this country, but also that we’re united,” Park said. “I think that’s an important message to send over the next 75 days or so in order to elect Biden and Democrats across the country.”

‘A fight for our democracy’

For Bell, Kamala Harris’ nomination for vice president was almost more enjoyable than being at the center of her own historic moment in 2009 as she spent her campaign focused on “knocking on doors, talking to voters and getting elected.”

“It’s been amazing to be able to sit back and watch that happen for another Black woman,” Bell said. “I think it speaks to the importance of making sure our representation on the highest level is part of what America looks like.”

Beyond the convention, Bell brings those well-honed skills from her own campaign and working for the Stacey Abrams campaign in 2018 as a deputy near the top of the Biden campaign in Georgia. Reese McCranie, a gay veteran of Barack Obama’s 2008 presidential campaign and Keisha Lance Bottoms’s 2017 runoff victory for Atlanta mayor, serves as Biden’s deputy director in Georgia.

But the 2020 presidential election is about more than party loyalty, according to the Q Conversations guests. It’s a referendum on Donald Trump.

Freedman drew attention to Supreme Court appointments as an example of how the tide could turn against LGBTQ equality long after Trump is gone. Park put it even more bluntly.

“We have to recognize this is a fight for our democracy. This is a fight for our republic,” Park said. “As imperfect as it has been, it has allowed us to make progress as people of color, as members of the LGBTQ community, and that’s something that’s precious, that we need to do everything we can to preserve.”

Boots on the ground

Bell said the Biden campaign in Georgia will try to empower apolitical voters to participate, and to get all voters to think about the future and realize there are ways for everyone to take part.

“We have a great opportunity here, to make sure that there’s diversity in how we get forward and not just in diversity within the campaign itself,” she said. “We need people in the streets, we need people who are sitting in elected offices pushing. We’re going to have heavy work to do even to get through this election.”

Panelists also offered actions that LGBTQ people can take during the election cycle in addition to volunteering. They suggested speaking out for issues you care about, posting resources on social media while fighting disinformation, triple-checking your status on the state’s voter website, planning how you will vote, and engaging with other voters.

Ultimately, the Biden campaign and the Democratic Party of 2020 are about hope, Bell said.

“We can look at where we are now in our country and what we know is to come, and that we do have a choice,” Bell said. “We don’t have to stay in what feels like a rut, what feels like depression, what feels like attacks every Friday at 4 o’clock. The most meaningful part is a sense of hope that we can get past this.”