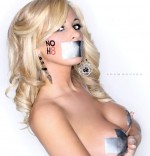 It’s clear from Bravo’s “Real Housewives of Atlanta” that Kim Zolciak couldn’t carry a tune if it was in a bucket. So she won’t dare sing the over-produced “Tardy for the Party,” her iTunes dance “hit” when she appears at Blake’s tonight at 10 p.m.

Of course, that won’t stop fans of Zolciak and the show from showing up in droves anyway.

Blake’s welcomes Zolciak as she greets fans and continues to build her reputation as a gold digging stripper-turned-new money trash. Kim a stripper? Hard to fathom, we know, but don’t take our word for it. Just ask her local “I Am Someone–Really” gay publicist, Jonathan Jaxson. Apparently, after Jaxson sued Zolciak earlier this year, the two are back together like two D-Listers in a pod.

Kim’s not getting much love from any media outlet today. To make light of the litigious incident and the pair’s subsequent reunion, Q100’s Bert Show played a clip this morning of their interview with Jaxson that took place during the parting of ways. In it, Jaxson goes off about Zolciak’s alleged stripper past and her Atlanta sugar daddy, a man referred to on the TV show simply as “Big Poppa.”

We admit, it’s hard to look away when one train wreck hurls accusations at another.

But what about Zolciak’s stripper present? Yes, Kim bares her (fake? ya think?) titties for the latest “NO H8” ad campaign (photo) supporting gay marriage. Gotta love a trashy reality show personality who loves us back.