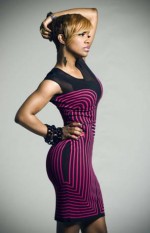 Monday means “Real Housewives of Atlanta,” and this week, it also means we have the video for the first single—sexed up with Pooch Hall and Von—from cast member Kandi Burruss’ new album, due to drop on Dec. 14.

The new single and its video hit hard on Friday, Oct. 29. The song is co-written by Kandi (photo) and Von, who appears in the video as half of its male sexiness. The video previews the “Kandi Koated” album with scenes shot all around Atlanta, including at Chris “Ludacris” Bridges’ Straits restaurant in Midtown.

“Kandi Koated” is a bittersweet move forward for Kandi, whose media frenzy over “Real Housewives” and her engagement to AJ Jewell went into overdrive when Jewell was shot and killed as last season wrapped. Kandi toyed with the idea of not returning to the show, she says in a press statement about the “Leave U” release.

“I had a cool life before, so I quickly asked myself ‘Why am I doing this?’ I am not attention driven. The things that I do, I do because it’s fun. But, I realized I have the opportunity to show an example of a woman being an attentive mother and taking care and control of her own life and career.”

After parlaying her success as part of the ‘90s girl group Xscape into solo records as well as writing hit songs for TLC, Destiny’s Child, P!nk, N*Sync, Usher, Boyz II Men, Fantasia and even Whitney Houston, Kandi’s “Kandi Koated” gives us “a little taste of me,” Kandi says. “When I think of candy coated, I think of adding a little sugar to something and making it better.”

Taste the sweetness of the video for yourself below, or view a behind-the-scenes video of the shoot.

The single “Leave U” (second photo) is in stores and online now. Programming note: “Real Housewives of Atlanta” moves from Mondays to Sundays beginning Nov. 7.