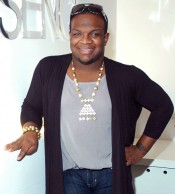 Who can turn Kim Zolciak’s wig issues into a party? Who can turn ordinary hair into “Good Hair”? It’s Atlanta’s Derek J, of course. The “Real Houswives” hair diva is back as a judge on Oxygen’s “Hair Battle Spectacular” on Tuesday.

As the only man who can wear a wedding dress to an Atlanta society function and get away with it, Derek J (top photo) is fresh off of an afterparty at gay club Traxx Atlanta last weekend that celebrated the Bronner Bros. International Hair Show and his role in “Good Hair,” Chris Rock’s 2009 documentary about the annual competition.

The celebrity stylist and local salon owner tells the AJC that he had a blast in Los Angeles filming, judging and mentoring on “Hair Battle.”

“It was definitely different being on the judge’s side as opposed to being a competitor,” he tells the paper.

Just as Derek J makes an impression on “Housewives,” he left such a mark on the Bronner Bros. documentary that producer Chris Rock knew where to turn when his latest project called for chicken wire, wig extensions, props and more hair product than a Saturday night gay bar.

Look for his trademark sass and flash to invigorate the reality format we know so well: Contestants—including Atlantan J-Rok (second photo)—are given a challenge each week, drama ensues, and a catwalk determines who wins and who goes home.

To put even more show in the show, “Hair Battle” also includes a choreographed performance on the final runway as part of the challenge. The ultimate winner walks away with $100,000, so as fun as it is for us, it’s no joke for the contestants.

Sounds like a great appetizer while we wait patiently for the next installment of “Real Housewives” to return this fall.