Real Atlanta needs to catch up to ‘Love, Simon’ version 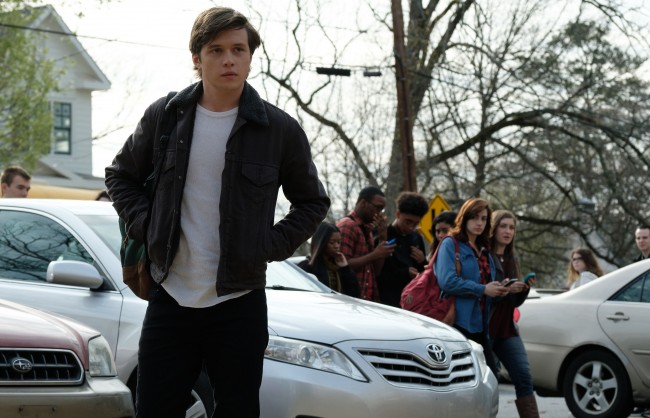 If you’re expecting the expected in Love, Simon, you’re in for a pleasant surprise.

When it was time for the film to start at a recent press screening in Atlanta, a spokesperson gave a shout-out to Riverwood High School, and the theater full of teenagers went bananas. Becky Albertalli, a 2001 graduate of the school, wrote the novel “Love, Simon” is based on, “Simon vs. the Homo Sapiens Agenda,” and she was at the screening.

The film was shot in Atlanta, and director Greg Berlanti (“Brothers and Sisters,” “Riverdale,” all of the CW’s DC Comics series, “Dawson’s Creek,” and more) was in attendance, as were several of the cast members, including lead actor Nick Robinson (“Jurassic World”) and Alexandra Shipp (“X-Men: Apocalypse”).

When Robinson, who plays the title character, was introduced, the crowd went apeshit. The teenager beside me began screaming things like “I love you,” “You’re so hot,” and, my personal favorite, “Sit on my face!” Every time Robinson spoke, the youngman swooned and, as the film was playing, gasped every time Robinson appeared onscreen.

I just turned 45, and it’s impossible to put myself in the shoes of this bi or gay teen, who feels comfortable enough in his own skin to be self-aware, out, and bold. Far from being annoying, it was endearing and heart-warming. That kid might as well have ridden to the theater on a unicorn because his life seems like science fiction to me, but wonderful nonetheless.

Midway through the film, which is as mainstream of a teenage romantic comedy as “Sixteen Candles” or anything else born from the mind of John Hughes, I realize that the strikingly handsome man next to me, with a baseball hat pulled down low over his eyes, is Drew Starkey, one of the cast members of the film. We chatted a few minutes after the screening, and he said it was the first time to see the film all the way through, and that he was amazed at the reaction of the crowd.

As you can imagine, a theater full of teens wasn’t the quietest place … until the film started. They fell silent, as if under a spell. As the film progressed they started emitting quiet reactions of “awwww” in sweet moments, whispering “no” during sad occurrences, and cheering Simon’s triumphs. Normally, all of this would irritate me, but feeling the excitement and support from these teens made a different impact.

I kept thinking, “What if a mainstream film like this had been made when I was a teen? How would my life, and the lives of thousands like me, have been different?” Jennifer Garner and Josh Duhamel – actual movie stars! – play Simon’s parents. This is a huge wide release, not an independent movie that might find its audience and fuller life on video. And it tells the story of a young gay teen!

After the screening, I thought about the young actor who got to see the finished product with a theater full of kids from the high school that inspired the source material. He got to hear their cheers and feel their personal, uplifting energy. I hope their enthusiasm informs his career and future.

I also thought about the queer teen sitting next to me, living an authentic life at such a young age. I’m glad he won’t have to go his whole adolescence without seeing a relatable story onscreen. I’m glad he has peers who cheered for the gay protagonist.

I was moved to tears several times during the evening, touched by how accepting and positive the crowd was. I hope the real Atlanta can become more like the Atlanta in the film, and that all the teens like Simon hear more cheers in their lives.

Love, Simon opens in wide release across Atlanta on March 16.

In addition to the release of Love, Simon, one of the most revered high school cult films, Heathers, got the TV reboot treatment with a full season order from Paramount Network. The 1988 Winona Ryder classic, full of iconic lines like “Fuck me gently with a chainsaw” and “I love my dead gay son” left no fan thrilled by the idea of another watered down reboot, but no could’ve expected the firestorm of angry think-pieces this show has received since critics received their screener copies.

Much of the criticism stems from the fact that the new “Heathers” are comprised of queer and genderfluid characters. It subverts audience expectations by turning the misfits into the popular kids who wield their identities like weapons and take no prisoners. Some queers are upset, too, as we all know this is not the reality for most LGBTQ high-schoolers.

Having seen just the pilot, I thought it was refreshing to see subversive new layers of queer representation. In a media landscape full of Cam & Mitchells, where lesbian characters are constantly being plucked off and trans characters seem to be incapable of doing anything except crying into mirrors (and played by cis actors), it’s exciting to watch.

Also, the call is coming from inside the house, y'all — the staff of this show is mostly queer. Let's learn to laugh at ourselves once in awhile. Give me more queer villains! And I’m not talking about the coded queer Disney villains. I want more full-on Divine level fabulous villains, who look good and revel in their wicked dysfunction.

In light of the recent Parkland school shooting, the series is postponed, but the pilot episode is free on the Paramount Network.

[Over on Netflix, Everything Sucks is yet another look at a queer-inclusive high school, this time with less uproar at least from the home team audience, but just as much attention from conservative critics. On it, a lesbian character on the crux of coming out is treated as just another member of the main-cast anti-heroes – with authentic, heartwarming results. – Editor]

A version of these articles originally appeared in Q magazine. Pick up your hard copy at venues around town, and read the digital version below.