State Rep. Rashad Taylor, who came out publicly as gay under duress last year, on Tuesday blasted a campaign flyer aimed at him, calling it an anti-gay attack from political opponents looking to turn voters in southwest Atlanta against him.

Taylor, during a press conference on the steps of the State Capitol, called the flyer “politics at its worst.” He demanded that his opponent in the race, gay-friendly Rep. Pat Gardner, denounce the flyer and make sure campaign staffers had nothing to do with it.

On Tuesday, Gardner did just that.

“I had nothing to do with that campaign flyer,” Gardner said. “I would never put that kind of stuff out. All of the race bating, the gay bating. It is the worst possible thing as far as I’m concerned. Why he would even consider making it my problem is a little insidious.”

The flyer – “The Real Rashad” – points out that Taylor is the only openly gay member of the state House and was accused of using the perks of his office to trade for sex. It also asks, “Does he represent us?”

Taylor came out in May 2011 after the ex boyfriend of his partner forced the move when he distributed an email accusing Taylor of being gay and alleging that he misused his state office. Those allegations were never substantiated.

This campaign, to be decided in the Democratic primary on July 31, is the first one Taylor has run since coming out. Republican-led redistricting put Taylor and Gardner against one another and pitted one other LGBT lawmaker against a gay-frendly opponent. That race is also generating controversy. Georgia Equality has endorsed all LGBT incumbent state lawmakers except Taylor.

Taylor also criticized accusations in an Atlanta Progressive News article questioning whether he’s a resident of his legislative district. 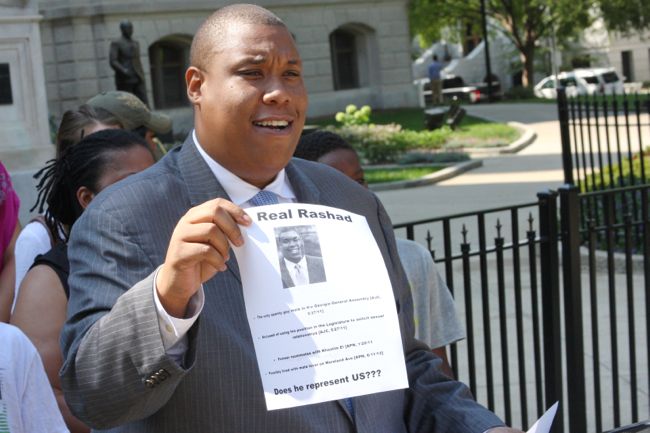