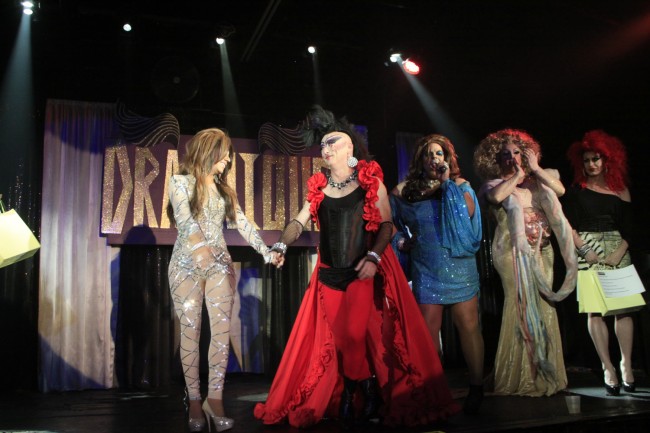 The second round of the reality TV-style elimination competition Dragnique ended Friday at Jungle with a raucous crowd, celebrity guest judges and the ultimate winner, Rapture Divine Cox.

Cox (top photo, in red), nee Rick Westwood of the East Point Possums, is also a member of the Atlanta Order of the Flaming Sugarbaker Sisters, and the Dragnique victory was just the cherry on top of an already big and tasty weekend for the group.

The Sugarbakers hosted their fans and some out-of-town guests for events Friday through Sunday—including a contingent in the crowd at Dragnique on Friday—to celebrate their recent qualification as an official chapter of the national Sisters of Perpetual Indulgence, a longstanding social club of “gay male nuns spreading cosmic joy.”

Also doling out critiques on the panel was “Braxton Family Values” star Tamar Braxton, who was accompanied by all of her sisters from the show except Toni. Performances during the show included Dragnique Season 1 winner Janelle Brooks and runner-up Gunza Blazin.

Next on the stage at Jungle is an upcoming theatrical production of “Vampire Lesbians of Sodom.” After the first round of Dragnique earlier this year, the club staged “Cabaret” to keep crowds hungry for original entertainment flowing through its doors.

Does all this spell Dragnique 3? Fans are eagerly anticipating a pending answer to that question.