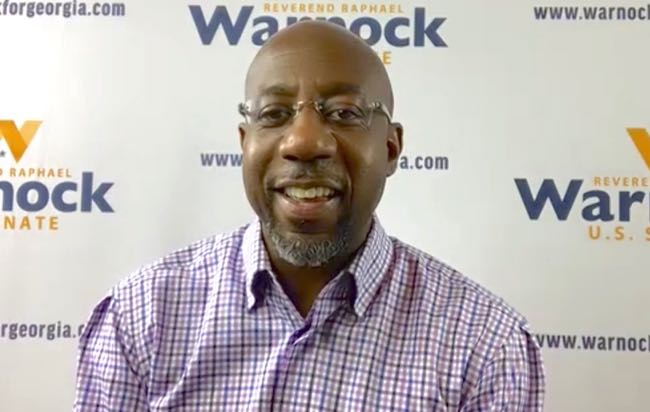 The hour-long virtual meet and greet came as polls showed Warnock surging to the top of a crowded field in the special election. Gov. Brian Kemp appointed Loeffler to her seat in December, and she quickly carved out an anti-LGBTQ track record.

Warnock told LGBTQ voters during the event that they have an ally in him.

“I don’t believe that there’s any such thing as equal rights for some,” Warnock said. “And so my journey on embracing fully members of the LGBTQ+ community and the issues that you bring to the table [is] part of my continuing trek to try to be a better leader and a better person.”

State Rep. Park Cannon, one of five LGBTQ members of the state House, praised Warnock during the session. He lives in her district, and she’s a member of Ebenezer Baptist Church, where Warnock has served as senior pastor since 2005.

“He has been there as my personal pastor,” Cannon said. “I remember the Sunday that marriage equality became the law of the land and sitting there in church and hearing him speak openly to the community and say, ‘You know we’re going to figure it out how we do this here at Ebenezer.’”

Savannah Mayor Van Johnson, who helped shepherd the passage of broad protections for LGBTQ people in the coastal city earlier this year, also endorsed Warnock during the call.

Warnock credited LGBTQ people with working to build a nation of “multi-racial, multi-faith, diverse coalition of conscience, black and red, yellow, brown, black and white, people of various orientations” that embraces “all of its citizens.”

“I know that the LGBTQ+ community has long been a part of that fight, and the tip of the spear and so I’m really honored to have this opportunity to have this conversation with you,” Warnock said.

He also said the country has “a long way to go” to deliver equality to all, but that the LGBTQ movement shows where others don’t have “access to this life, liberty and the pursuit of happiness.”

“We’ve needed members of the LGBTQ+ community to show us our blind spots and help us to become a more perfect union. So thank you so much for that work. We’ve got a long way to go. Know that in me you’ll find an ally,” Warnock said.

The longtime Baptist preacher also addressed concerns from participants in Monday’s event about the trauma that some LGBTQ people experience at the hands of religious leaders.

“That trauma is something that I take seriously,” Warnock said.

“I think that there are bigots who are people of faith, and there are bigots who are not people of faith, and all of us have to be full-throated in opposition to bigotry. You can’t simply be committed to not saying things that are homophobic or transphobic. In the same way that we ask white people to be anti-racist and not just acknowledging it, we have to be full-throated in standing up against bigotry,” he added.

Warnock also said his experience as a pastor would help him support legislation such as the Equality Act and combat anti-LGBTQ bills from Republicans, including “religious freedom” and RFRA legislation that Loeffler backs.

“I am aware of the ways in which religion is so often used as a sword rather than a shield, as a weapon rather than a bridge,” he said. “I believe for me my faith means freedom, which is why I can’t wait to get to the U.S. Senate so when some mealy-mouthed politician stands up, pushes up against the Equality Act and comes up with some version of some RFRA law, I want to argue.”

“It would be helpful for you to have a pastor in the senate say, ‘What do you mean that the equal rights of some is an affront to my religious freedom? What kind of distorted perspective is that? I am offended that you would suggest that by extending equality to some that somehow that undermines my freedom as a person of faith. No, to the contrary, when I see that other members of our human family are marginalized in some way by their very identity, who they understand themselves to be is somehow in danger, that’s what’s an affront to my faith,” Warnock added.

When pressed about the violence faced by black transgender women, Warnock said he wants “to sit down and hear more from the trans community.” But he was clear that people must stand up against violence targeting trans people, as well as politicians who create an atmosphere of “hatred and fear” that breeds it.

“If you see hatred, fear is always not far behind. And those two things go hand in hand. And we’re seeing politicians right now gin up that view rather than trying to push it back – literally trying to gin it up,” he said.

“We have to stand up against it when we see it no matter where it shows up. And it doesn’t matter that it’s coming from other people of color or black people or whomever. We have to push against it from a public policy standpoint. We need to make sure that our hate crimes laws cover the non-binary community,” Warnock added.

When asked if he backs policies supporting the safety, rights and dignity of sex workers and people living with HIV, Warnock was clear: “I absolutely will.”

“I’ve been working on HIV/AIDS for years, since the 1990s. And I’m concerned that we’re barely talking about it nowadays. People act as if it has gone away. And it has not,” he added.

“I can’t wait to get to the United States Senate to translate my advocacy and activism into legislation,” Warnock said.