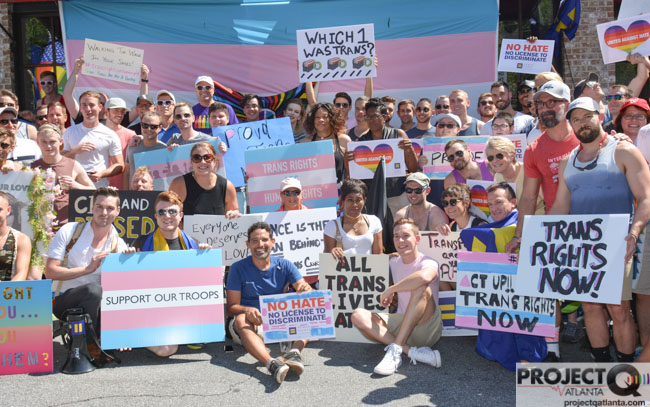 The rally, organized by Rainbros, took place in the parking lot of Ten before participants then marched around the newly-installed rainbow crosswalks at the intersection of 10th Street and Piedmont Avenue. Marchers then proceeded west along 10th Street.

The event also served as a kickoff to 30 days of action on transgender issues from Rainbros, a group that launched last fall offering peer coaching for gay Atlantans. The group wants to raise $20,000 to donate to trans organizations, including Trans Housing Atlanta, Transgender Health Education Alliance and Transgender Individuals Living Their Truths.

Our transgender friends are under attack on a number of fronts and we are coming together to support causes and organizations that are working to protect and defend them.

By Tuesday, some 46 people had donated $3,335 to Support out ATL transgender orgs!

During the march, Charlie Stadtlander – a gay candidate for Atlanta School Board candidate – was assaulted and robbed.

In March, some 200 LGBTQ people and supporters marched through Midtown to protest violence against transgender people.