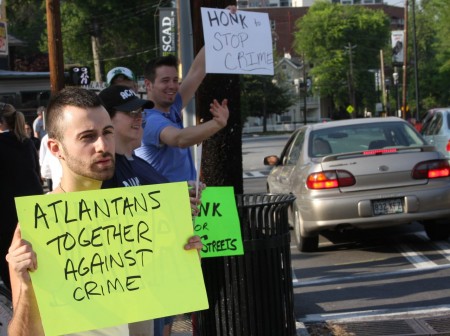 The center of Atlanta’s gayborhood hosted a rally Monday evening to increase awareness about crime and hate crimes legislation.

A few dozen protesters fanned out across the intersection of Piedmont Avenue and 10th Street for the event, the fourth rally organized by Atlantans Together Against Crime & Cutbacks. Kyle Keyser (photo), a gay Little Five Points resident, formed the group in the wake of the shooting death of a bartender at a Memorial Drive restaurant late last year.

Jeff Graham, executive director of Georgia Equality, delivered an impassioned speech about the need for hate crimes legislation to be passed in Georgia. ATAC, though, has not taken a position on the legislation.

The location of the rally was near the March 8 attack on John Evans, a gay man who was beaten after he left Blake’s on the Park. No arrests have been made in the incident.

View the Project Q Atlanta photo album from the rally.