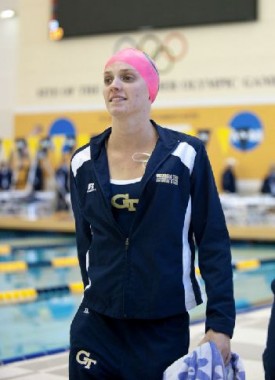 Wonder how the gay jocks of the Atlanta Rainbow Trout get their swim on so well? A coaching staff with the likes of Heidi Hatteberg. Sorry she won’t be at practice this week. She’s competing for a spot in the Olympics. Snap!

Hatteberg, a Georgia Tech alum and the latest addition to the Trout’s coaching roster, is in Omaha this week competing for a spot on the U.S. Olympic team in the 100-meter and 200-meter backstroke events. She hits the pool on Tuesday in her second attempt at living out her Olympic dream. Hatteberg missed a spot on the team in 2008.

“Everything is different this time,” Hatteberg says in a prepared statement. “I have a lot more experience. I’ve put on a lot of muscle through college training and have matured a lot more mentally.”

The gay Trout squad has been grabbing headlines of late. The water polo team scored a silver medal at the International Gay & Lesbian Aquatics Championships earlier this month, they hosted their Spring Splash meet in April and their triathletes are quite competitive, too.

Hatteberg, who is straight, says that her work with the Trout helps ease the stress of her high-level Olympic pursuits.

“The Rainbow Trout make me laugh every practice. They have been so open to my style of coaching and that makes coaching them so enjoyable,” she says. “Whether their goal is to go to Master’s Nationals or swimming just to stay in shape, I can help them improve their stroke and challenge them to exceed at what their goals are.”