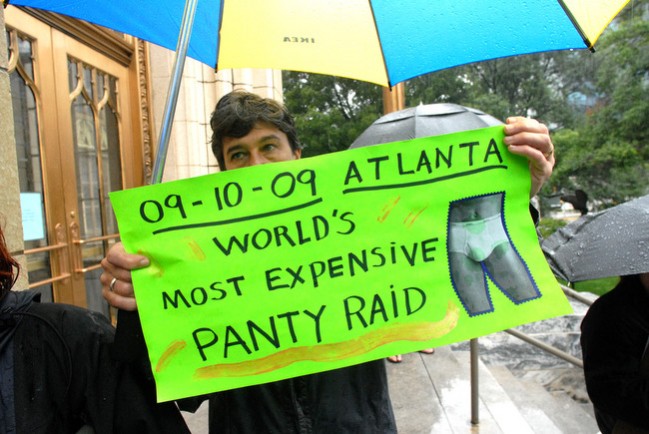 If you need a better understanding of just how pissed people are about the Atlanta Police Department’s Sept. 10 raid of the Eagle, look no further than the steps of City Hall.

That’s where somewhere between 60 and 100 people — it depends on which media outlet you’re reading — gathered on Saturday during a downpour that soaked Atlanta with several inches of rain, flooded homes and put the region under a flood watch until Monday.

But there they were — protest organizers on the steps of City Hall for the second rally in the wake of the Eagle raid that resulted in eight arrests, an internal investigation by police and calls from a handful of political candidates to find out exactly what happened and why.

You’d think that with protesters rattling the doors of City Hall that Mayor Shirley Franklin or Anne Fauver, the only openly gay member of the Atlanta City Council, might appear or issues statements about the raid and the ongoing investigation into it. You’d be wrong. Neither has appeared nor spoken publicly about the raid and the Eagle sits right smack in District 6, which Fauver represents.

Fauver has come under some fire for not speaking out about the raid, while Georgia Equality has asked of Franklin a host of questions that so far have gone unanswered. (We’ve asked the mayor for a comment, too, and haven’t received an answer.)

Michael Alvear, a blogger, said the outrage is not only about what happened at the Eagle but also about protecting the next gay bar.

“This raid was based on homophobia … it was the gay panic offense,” he said. “Instead of worrying about home invasions [the APD] is worried about homo hand jobs. Which is the greater threat?

“We were mugged by the police,” Alvear added. “They stole our dignity. Police will tell you when you are being mugged, not to resist. And we didn’t.” But muggers like easy targets, he added.

“And we are not going to be easy targets,” he said.

A rundown of the coverage:

• ‘This is not about Eagle or Midtown, but all of Atlanta’ (SoVo)