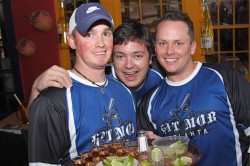 Rain may have dampened its pre-season softball tournament, but the Atlanta Hit Mob never missed a beat when it came to post-game festivities last Sunday.

The team, which plays in the C Division of the Hotlanta Softball League, had hoped to stage a warm-up tournament for other HSL teams. But thanks to a batch of rain courtesy Mother Nature, the tournament was scrapped. 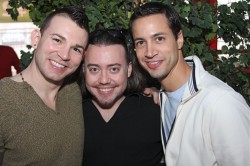 The tourney post-party at Las Margaritas on Cheshire Bridge, though, remained in place. With DC Sean Mac spinning, a performance by BrentStar and plenty of cocktails, softball (and the rainout) was easily forgotten.

The afternoon also served as a warm-up for the Hit Mob’s weekly post-game festivities that will take place once the season opens on March 21.