Racism in Atlanta’s gayborhoods runs deep. Where do we go from here? 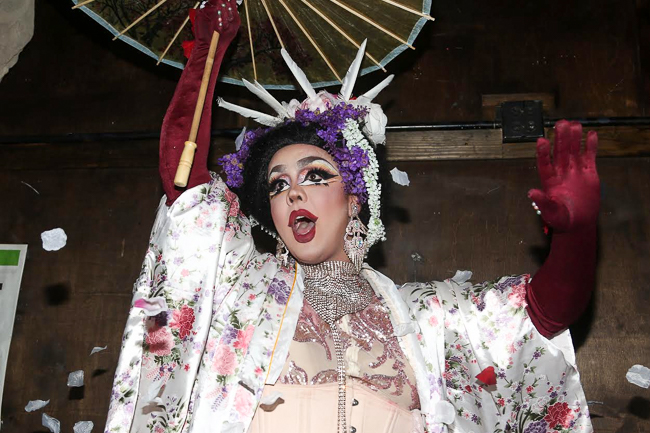 Let’s be real. Many queer folks and people of color don’t feel welcomed and are not welcomed in many predominantly white and cisgender spaces. We feel like establishments tend to cater themselves to muscled boys and silence those who raise valid concerns.

From one incident to another that cause a huge stir and die down, myself and others take opportunities to air our negative experiences and frustrations over our interactions while in Atlanta’s “gayborhoods.”

But why do we take offense? There are some common threads that I’ve noted from mine and other people’s experiences.

Once we walk in the door of certain gay venues or on certain nights, we’re met with a crowd of folks that seemingly look the same: white, cisgender and able bodied. Bar staff, especially bartenders, tend to skip over you in favor of their whiter, beefier clientele.

There’s a history of racist dress codes that specifically targeted prospective black and brown patrons. The presence of police, a lack of diversity in bar staff and clientele, and exclusionary policies tell QTPOC that they aren’t wanted and that their money should be spent elsewhere.

Microaggressions like these compound upon each other to create a hostile space where many QTPOC feel as if they don’t belong.

I’ve heard so many times from folks of color that they avoid Midtown because its “reputation precedes itself,” and its association with rich, white cis gay men is historically accurate. However, we shouldn’t isolate racism and transphobia in gay spaces to a particular part of Atlanta as if it only occurs in one space. Racism lives everywhere that queer people gather, and it’s important to recognize that. This is why the venues that make and hold space for queer and trans people of color are indispensable and need to be preserved.

As Midtown — and other pockets of intown Atlanta — grow in a way that favors higher incomes and lighter skin, an opportunity for equitable growth developed flavorless “gayborhoods” that do not hold space for the same queer and trans people of color that give queer Atlanta its vibrancy.

Why is that? This stems from the deep history of white supremacy in our city and community. Rich and white gay folks are willing to abandon queer and trans people of color in their pursuit of wealth-building and business development. What angers those most affected by this exclusionary pattern of behavior is that real people are being harmed, while those most privileged sustain the same oppressive structures they claim to be against.

I hold this tension to bear to point out how LGBTQ+ catered businesses, organizations and spaces, both intentionally and unknowingly, sustain white supremacy. They often use its destructive characteristics that make it difficult, even impossible, for the community’s most marginalized to thrive. While these entities claim to be open to everyone, they continue to hold space primarily for those who can adapt or conform to cultural norms and standards that exclude many QTPOC.

So, where do we go from here? The guidelines are pretty clear. It begins by addressing the cultural and structural problems that created the harm people presently experience. A few key issues keep coming up again and again: a deep fear of accountability, performative inclusion, and a “civility over all else” mentality.

You’ve most likely felt it too. In an age where everything is public and reactions to news are instantaneous, accountability becomes much more uncomfortable. Many people fear that admitting to a mistake or receiving criticisms will ruin their futures — especially in conflicts where racism is at the center of the conversation. Those fears don’t excuse anyone from silencing concerned parties.

People often perceive criticisms only as attacks on their own character. Instead of taking responsibility for their wrongdoing, offended parties are quick to cover up mistakes, dismiss the issue at hand and counterattack anyone who raises dissenting concerns. This re-centers the position of conversational power on the offending party, rather than on the impact their actions had on the people raising the points of concern and frustration. That’s an obstacle to any true growth, and it feeds into the cycle of oppressive structures.

Here’s the thing: Whether or not white folks of any gender or sexuality want to admit it, they are a part of a larger culture of white supremacy. Racism isn’t just limited to public displays of intentionally insidious behavior. It reaches deeper and further into the very fabric of our society. The only way to make things better is to acknowledge the naked truth, take ownership of the harm, and focus on bettering the impact that our actions have.

It is possible to hold the tension where true accountability and room for growth exist in the same space. Even though it may not currently be the reality, every queer business owner that I know in the area originally opened their establishments with the intention of creating a space where everyone is able to take a breather from life and relax with their chosen families.

Re-centering this initial intent is the best way to generate positive change — but it ain’t the responsibility of QTPOC to fix it. It’s incumbent upon allies in this space to join in this work and make changes where they are able.

To change our spaces into legitimately inclusive spaces where everyone belongs, those holding power have to curate a culture and sustain a structure that allows for their intentions to become a reality. When conflicts arise, they listen and fix the systemic deficiencies that created this issue at hand.

I’m not sure if Midtown, or any predominantly white queer spaces across Atlanta, will ever be what we truly need as a community – but we can and should make changes where they are desperately needed. If our community is to thrive, we must do so together.

Mx. SHI aka Bentley Hudgins is a drag performer, show runner, and queer activist in Atlanta. Reach them at [email protected]. Photo by Kay Mercer @busybodydeer.