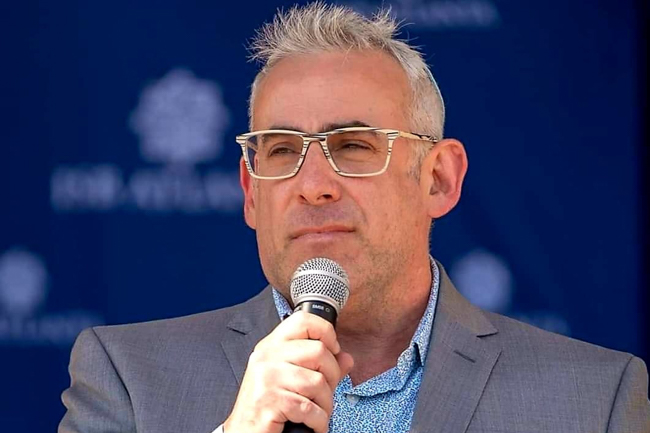 When Joshua Lesser leaves his post as senior rabbi at Congregation Bet Haverim in May, it will be with more than two decades under his belt. During that time, Atlanta’s synagogue founded by and for LGBTQ Jews saw remarkable change, growth and accomplishment.

“Serving CBH has been incredible,” Lesser told Project Q. “Being the rabbi of a community that was founded by gay, lesbian and bisexual Jews and their loved ones in the South has been extraordinary.”

“And as we welcomed straight folks, we led LGBTQ-founded synagogues in the country thinking about how queer values impact everyone’s life for the better,” he added. “It has been a rich time filled with learning and growth and furthering a sense of justice.”

When he started 21 years ago, the congregation was already going strong with lay leaders, a part-time rabbi and a membership-led approach. To add to the challenge as their first full-time rabbi, Lesser was also among the youngest people in the congregation, he remembered.

“I was young and serving a congregation where most of the members were at least a decade older than me,” Lesser said. “LGBT communities, understandably, are reticent about leadership. While the position has changed tremendously, it has been gratifying to shift from in some ways a glorified service leader and programmer to become a trusted spiritual leader.”

The rabbi’s last day is May 31, and he will remain with the congregation in an emeritus role. He counts among his accomplishments the founding of SOJOURN – Southern Jewish Resource Network for Gender & Sexual Diversity – as well as co-editing the book Torah Queeries, a weekly Torah reading guide through an LGBTQ lens.

“We have grown a great bit and have always been ambitious in what a congregation our size could accomplish,” Lesser said.

Lesser has boosted one Atlanta mayor and advised another (twice). He can tout titles including as a “Most Influential LGBTQ Georgian” and an Atlanta Pride Grand Marshal (again, twice).

Lesser denounced so-called “religious freedom” bills in the state legislature. He helped broker a compromise with Occupy Atlanta and negotiated with Atlanta Pride over calendar conflicts between the Pride festival and Yom Kippur.

He even joined clergy contingents in counter-protesting an anti-gay rally and encouraging gay people to “Come Out Spiritually.”

All those moments and more aside, Lesser cites guiding Congregation Bet Haverim’s young people among his proudest moments.

“Supporting our children to find their authentic expression and create a model of Judaism that is loving, compassionate, and challenges the gatekeeping norms that too many congregations still adopt,” Lesser said.

Lesser took some time to reflect on his time at CBH, how times have changed since he started, and his visions for the future for himself, the congregation and LGBTQ Atlanta.

What made now the time for you to step away from your role at CBH?

I have been discerning what was next for me. CBH has always been a place that has supported my reinvention of the rabbinate.

I founded SOJOURN and helped found the Faith Alliance of Metro Atlanta. I participated with the Institute for Jewish Spirituality and then trained to become a spiritual director to give some examples.

There has been vitality in my ability to vision, train and reimagine. This move is a part of that.

I am increasingly drawn to bolder, innovative opportunities in religious and spiritual spaces. Institutions, even one as forward-thinking as CBH, are risk-averse. As I age, I am more interested in risks worth taking.

Similarly, I am interested in and called to respond to injustice, social healing, and repair. So for me this is less of a leaving and more of moving towards what is next.

Also, leading through a pandemic has honed what is important and made the calling even more present. As a gay man without children, I look at impact and legacy, and I want to extend my reach beyond a congregation and leave something of importance behind – or at least feel like my life was dedicated to leaving the world a bit better.  This first year, we have fared well, and so I knew despite it being difficult, they are in a good and solid place.

And 21 years is a substantial time to dedicate to an organization. I have been a workaholic – for so many reasons – but I am in a place in my life where I want to devote time to my family and friends, something that I have not always been able to do over these years.

What have been the reactions from the Congregation Bet Haverim board and congregation?

Naturally, there is sadness, but I do not think it has been a tremendous surprise. The lion’s share of people have been supportive, encouraging and excited about what is next.  Many are hopeful to stay connected to whatever the next projects may be. I also believe that folks are excited and anxious to define CBH and its mission independent of me.

What does the role of CBH’s Emeritus entail?

We are still spelling out what that means. It likely means that I will be involved in a few services and classes, I will and offer support and guidance when it is invited.

I hope it means I can share my endeavors with the congregation. Most importantly, I will need to support and create space for a new rabbi and a new vision.

The congregation has grown inclusive of more straight members over the years. How else have things changed?

We took the founding values of authenticity and radically welcoming and strive to apply that to all members. Thus, our membership has diversified in many ways.

We are currently exploring how we can embrace anti-racist principles and deepening our gender inclusion. These are works in progress – as all good inclusion work is.

Before Covid, having our own building was such a big step allowing us to chart our own destiny. And then we have adapted and even grown on an all-virtual platform during the pandemic.

You listed some professional accomplishments over the last 21 years. What about personal ones?

I am proud that I am a more loving, generous person throughout this journey. I received death threats and was reviled in my first few years. Being a gay leader in the Jewish community has not always been so easy – and honestly lonely at times.

There have not really been any other gay men serving LGBT founded synagogues in the majority of my time as a rabbi, mostly lesbians and straight rabbis. And though my lesbian colleagues are awesome, there is some profound difference.

And it has been hard being a Jewish leader in the Atlanta LGBT community where there is antisemitism and repulsion to faith leaders, and there is a harsh critique that gay men can bring to other gay men.

But somehow, I have not been hardened, rather I am softer than when I arrived. Being more vulnerable and open is a miracle.

What are your expectations for the congregation going forward? Does anything change for LGBTQ congregants who may have joined the “gay synagogue”?

I think that depends on who they hire and how they adhere to the mission. Our mission statement explicitly states serving LGBT Jews and our loved ones, so I imagine that remains a powerful compass. I hope the community takes the time to understand who they are and who they want to be.

How do you envision your own future?

I do want to take some time and think. As a rabbi, I have not had much space, particularly in the demands of re-envisioning leadership in a pandemic.

I have just started a new non-profit, Bridges Faith Initiative, an interfaith immigration rights organization, with Policy Advisor Ronnate Asirwathram, in D.C.  I will serve voluntarily as the president of the board.

I would like to write, teach, offer spiritual direction, facilitate and dream. I am interested in the social healing space in the moment and believe my spiritual direction background, love of storytelling and commitment to meet people where they are at is important.

I work with a coach who has been excellent in helping me trust that the next right thing will emerge, and if not I will create it.

You mention antisemitism and harsh criticism. If you could change anything else about LGBTQ Atlanta, what would it be?

I wish we had more spaces and reasons to interact with one another. All these years later, we feel segmented. Also, I would be remiss, that we have a great deal of work to address the racism that still exists and our internalized challenges that makes us transphobic and not as open to gender diversity and equity.

Wouldn’t it be great if the LGBTQ community could be a leader in the New South in equity and inclusion?

What else? Anything you’d like to say about your transition, the landscape, or about LGBTQ Atlanta?

I am so grateful to so many leaders who supported me in the beginning. I have been reflecting on people like Phillip Rush, Harry Knox and Judy Colbs who at the very beginning had my back.

Mainstream liberal-progressive institutions have many challenges to face. In many ways, there is a tension between serving the baby boomers who are the primary members of most institutions and serving millennials in relevant and meaningful ways. As a Gen Xer — who does care! — I see this erosion and the hurt feelings on both generational sides.

The entire idea of membership, for instance, will need to shift, for the congregational world to survive and this kind of change threatens the stability of what baby boomers and older have come to understand as the purpose of the synagogue. Both sides feel fundamentally misunderstood with few options or reasons to connect and be in dialogue.

In the LGBT community, this divide is also present in how we identify as well, particularly in our understanding of gender diversity and traditional roles. There is personal, spiritual, collective work to be done for everyone, and I am particularly interested in how to bring misunderstood communities together.