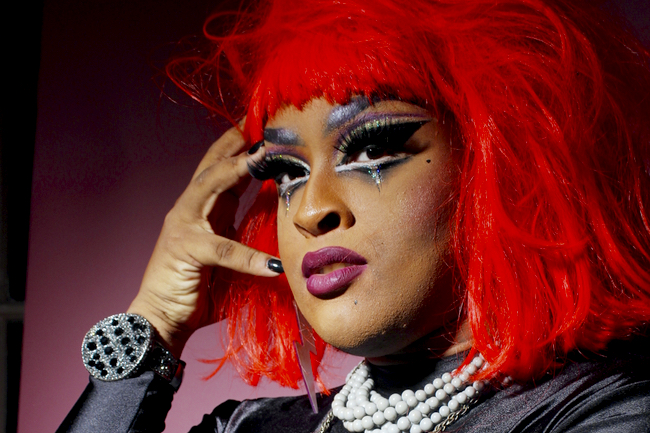 Meet Taylor Alxndr and get a load of her vision for LGBTQ entertainment in Atlanta. Music, performance artists and more come together for a unique queer experience this week.

When the queer variety show “Sweet Tea” first debuted in January 2014 at Noni’s on Edgewood, host Taylor Alxndr had no idea what kind of adventure would lie ahead. With a handful of performers who radically transcended the cookie cutter female impersonator, the handful of performers that cold January night left the accrued audiences craving more of the numbers that celebrated their uniqueness.

“Sweet Tea” quickly became a monthly soiree, first at the now-defunct Hangar, then at Eyedrum until mid-2017. It’s next event is set for Saturday at Mammal Gallery.

“I think what 'Sweet Tea' has established is an all ages queer space where so many forms of queer art meet,” Alxndr says. “'Sweet Tea' questions what our queer art spaces look like and how they can function better to bring us together.”

But “Sweet Tea” is just one of many integral queer events Alxndr puts her heart and soul into making happen. Somewhere in the midst of organizing events and working on her own personal performances while holding down a job, Alxndr and friends also created Southern Fried Queer Pride, an organization “committed to queer and trans art, activism, and community” that throws an LGBTQ festival in both Atlanta and now Durham, N.C. Few people juggle as much as she does in a month’s span, but the love and commitment to keep these scope-broadening events going are met with enthusiastic community involvement.

With a long standing run, “Sweet Tea” is constantly evolving with more agency than ever, according to Alxndr.

“We’ve switched up the formula and are planning bigger shows and productions that can occur at various venues all over the city,” she promises.

Saturday’s “Sweet Tea” displays some fanciful alterations to the event’s initial style. Where there has always been a presence of drag, music will take the helm for 2018’s first edition. Alxndr is a musician herself and has gradually been incorporating musical performance into events. Her curation of high kick, lip-synced tradition can be found in her most recent event, AMEN! Every first Thursday at Sister Louisa’s Church of the Living Room bar.

“From what I’ve seen, they make space for every kind of person to perform, all kinds of identities and forms of art, which is powerful and important in its own way,” Mystery Meat says. “Not something you see a lot of at the moment, and the variety and homemade feel to it is very pleasant.”

This will also be the first edition of “Sweet Tea” that has incorporated an artists’ market. Wares will range from rad DIY stickers, buttons, cards, zines, prints and patches by Shady Kimzey to artworks by Shanisia Schadenfreunde.