Queer truths for the Wrong, Needy, Biased and Wreckless 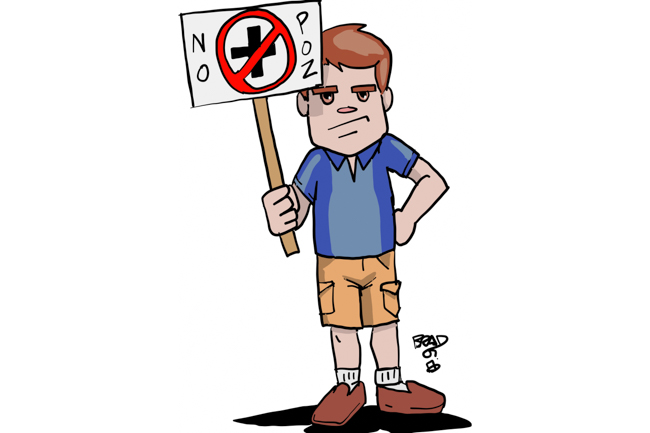 Some problems take effort to unpack. Others are easy for everyone to see a solution but the afflicted person. Take these quick-hit tips to common queer conundrums.

I make it a habit not to have sex with poz guys. Friends say I’m prejudiced. I say I’m careful. You know stuff. What’s the word?

The word you’re looking for is shortsighted. You miss good sex with great guys if you avoid the ones telling you they’re positive. You also miss out on people who know their status and are addressing it. The CDC and NIH say that poz people on treatment whose viral load is undetectable are also un-transmissable. Google “U=U.”

Also, how do you know the guys you’re doing are negative? What if they lie or think they’re negative but aren’t? What if you are undiagnosed positive and exposing others?

My longtime partner all but gave up doing little things to win my affection. Where are my flowers?

Go buy flowers if you like flowers. Give them to him and say you were thinking of him. Mention that you liked it when you did such things for each other.

I found out I’m HIV positive just as I started dating a new guy. I’m afraid telling him will ruin our chances. What’s my obligation?

There’s a saying: “We are only as sick as our secrets.” Honesty cures what’s really bothering you.

We’ve been together about eight months, and he asked me to marry him. I love him, but I’m hesitant over the short timeframe.

People used to move in together too quickly. Now some jump to the altar. Listen to yourself, hesitation means ease up. If it’s right, you’ll feel it even more in a year or two. Say yes to a long engagement?

I used to leave on the lights during sex. I loved seeing every detail and expression. Now I flip off the switch, because I’m self-conscious about looking older, but I do miss the visuals.

Queer self-image as we age is a whole column in itself, but here’s a quick suggestion for now: Candles. They’re moody, plus amber light evens skin tones and hides “imperfections.”

I get bombarded with hateful messages just because my Grindr profile says, “No Fats, No Femmes, No Blacks. No Browns.” I have nothing against those people, but I don’t want to have sex with them. Is that wrong?

There is a line between preference and prejudice, and you crossed it. Every person has physical “types,” but writing off entire demographics is shortsighted and rude at best, bigoted at worst.

Knowing what you prefer is one thing; judging a “those people” as you call them on one trait without seeing them is another. There’s a word for it, it starts with “R,” and your profile detractors are probably using it.

Q Advice is for entertainment, not professional counseling. Send your burning Qs to [email protected]

Find each new edition of QATLus at LGBTQ and allied venues around Atlanta. Message us on the socials or write [email protected].