Quest for Dolly helps top off Out on Film

Gay twins Gary and Larry Lane don’t just adore Dolly Parton; they created a roadtrip movie about it. “From Hollywood to Dollywood” bows Thursday at Out on Film with the brothers and director John Lavin in attendance.

In the film, Gary and Larry travel across the country in their RV (top photo) to hand deliver a script to their idol. Their journey to meet her in Dollywood, which they eventually do, is chronicled as they conspire along the way on how best to find her and get to talk to her. The two have met her once before and snapped a picture (middle photo), but it was a fleeting moment.

Along the way, they get advice from some Hollywood friends, including “Sordid Lives” alums Leslie Jordan and Beth Grant, actor Chad Allen and Oscar-winning screenwriter Dustin Lance Black. 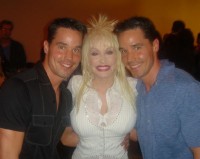 “Dustin helped us get the script down from where it was to about 107 pages,” Gary Lane says. ”Leslie was originally going to join us in the RV, but he got his one-man show and couldn’t come.”

The twins grew up in North Carolina and have vivid memories of seeing Parton and Kenny Rogers on TV. One thing that struck Gary is that Parton acknowledged her gay fans early on. 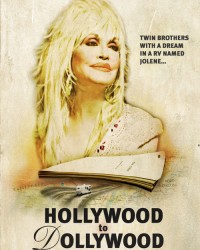 The Lanes have been in Los Angeles for 10 years now working in the industry, but the financing came about through an unlikely source. They were on the ABC game show “Wipeout” and won the family competition — that provided the case they needed. Every time they’d get hit on the show, they’d remember why they were on: “Boom – that was for ‘Jolene,’” Lane laughs.

Some make the assumption that Parton is more popular in the South because of her roots here, but Lane says anywhere they go with the film people love her.

“No one ever has a bad thing to say about her,” he says. “Anywhere we go, people leave the screening and want to go buy more of her music.”

They had to get permission from Parton to use her music in the movie, as well as the art for the poster (bottom photo).

“Her manager told us that Dolly had to see the film in order for us to get the permission and that she would give us a yes or a no, and she said yes!” Lane says.

“From Hollywood to Dollywood” screens as part of Out On Film’s full Closing Night lineup. An Out on Film Wrap Party/Atlanta Pride Pre-Kickoff follows at the W Atlanta Midtown Hotel. The afterparty includes Shangela from “RuPaul’s Drag Race” and the cutie from the new “A List: Dallas” on Logo.