Queers who offer an explanation when they owe an apology 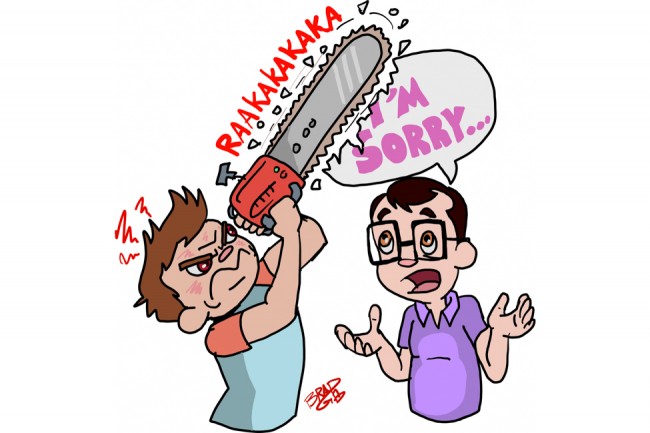 It’s hard to say you’re sorry, especially to a good friend with their own baggage, but if your version of apology doesn’t include the actual words, save it.

My ex and I didn’t plan it when we broke up, but over time we sort of split the mutual friends between us. Most gravitated to one of us in a natural way, but there’s one friend that I miss and will always miss, even years later.

There was some drama with this guy at the time of my breakup, but I was too wrapped up in relationship stuff to see his thing as very important. I was pretty dismissive, but his situation really did pale in comparison.

The problem is, I can’t explain it to him because he won’t have anything to do with me. He avoids me and turns tail in the opposite direction. On the rare occasion we are in the same room, he behaves as if I don’t exist, looking away or looking through me.

I have sent cards on holidays and his birthday, and I even had my ex reach out on my behalf. The friend is not interested in my side. How can I get him to listen and forgive me?

You don’t owe him an explanation. You owe him an apology. Talking about what happened from your perspective is about you, and that doesn’t earn a discussion, much less forgiveness.

Start by acknowledging his perspective, that he has a legitimate hurt and anger. Then accept that you played a role in it, no matter where you were coming from at the time. Now forgive yourself and forget yourself.

An apology should be about the person receiving it. You might say something like, “I’m truly sorry for hurting you. I want you to know that I deeply regret what happened. If you’re willing, I promise to listen the way I should have a long time ago, but I respect that you may not be in that place. Just know that I’m here if you change your mind, and that I will always care about you.”

Don’t ask for forgiveness, which would lighten your pain. Don’t offer justifications for your behavior. Acknowledge your acceptance of your role: “I’m sorry if I hurt you” is not the same as “I’m sorry that I hurt you.”

Your friend is expressing his pain by inflicting it back on you. The right apology says that you receive the message. That might create a path for him to communicate again.

Emphasis on the word “might.” You can do everything right, and he still might not forgive you. That’s on him, and you may have to swallow that final piece of hard truth, but at least you can work on moving on with a clearer conscience.

I hooked up with this guy who turned out to be a little more drunk, and a lot less satisfying, than either of us anticipated.

I called him an Uber, and since then, he has apologized profusely. I think a lot about what it would be like to have sex with him. I’m really attracted to him, but I can’t bring myself to forgive him because he totally doesn’t deserve it. Am I being too harsh?

Forgiveness is not for him. It’s for you. You admit he’s occupying space in your head that you can’t shake – that’s because you haven’t forgiven him.

Now you can decide if you want to have sex with him or not, keeping in mind both the red flags of his past behavior, as well as your own experience with mistakes when you wanted a second chance.

This column originally appeared in Q magazine. Enjoy all of the past editions of The Q advice column, read the latest issue online here: