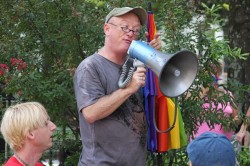 The Queer Justice League took their beef with Sen. Saxby Chambliss to the front door of his Atlanta office Wednesday, meeting with staffers for an hour to lodge their complaints.

The face time with Camila Knowles, director of Chambliss’ operations in Georgia, came a little more than a week after a staffer in the office posted “All faggots must die” on a gay blog just a short time after Chambliss and other Republicans in the Senate beat back an effort to repeal “Don’t Ask, Don’t Tell.” The comment ignited a firestorm of controversy and media attention.

On Wednesday, about 10 members of the grassroots group – which has helped organize a handful of successful rallies on LGBT issues, including one Aug. 7 at the State Capitol – met with Chambliss staffers at his Atlanta office along Interstate 75 near the Cobb Galleria. On hand were several LGBT activists, including Rick Westbrook (top photo), Brad Ploeger, Nick Koperski, Johnnie Curran, Shannon Hames, Art Izzard and Paul Schappaugh.

The group (second photo) demanded a public apology from Chambliss and asked that his staff undergo sensitivity training. Here’s how the Queer Justice League described the meeting: 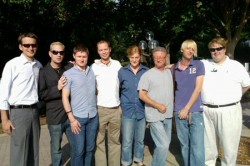 Camila Knowles, Chambliss’ State Director and General Council received a letter to be forwarded to the Senator from us outlining our demands and answered questions we had about the incident. She acknowledged that the incident was under investigation, was likely a violation of their office policy, and may result in the dismissal of the staff member. She assured us that the comment does not reflect the Senator’s views.

We reminded her of the June 12th attack on Kieran Daly by two Marines in Savannah, and the recent suicides of Seth Walsh and Asher Brown. We suggested that the Senators’ inaction against a member of his own staff only serves to embolden the bullies and bigots that attack our community across the nation on a daily basis.

Finally, we proposed that as Atlanta celebrates Pride next week the Senator has the opportunity to open a dialog with our community, beginning with a public apology for the behavior of his staff. And we reminded him that we will not forget this incident and that we will in the words of QLJ member Bekah Ward “we’ll keep the pressure on”.

On Sept. 22, Chambliss issued a statement confirming that the blog comment came from his Atlanta office. But he declined to take action against any of the 42 staff members that work there, instead deflecting the issue to the Senate sergeant at arms.