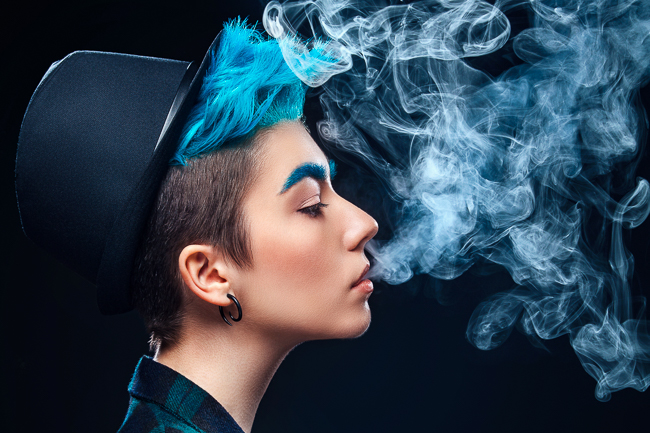 On April 17, Gov. Brian Kemp signed a bill into law that allows cannabis to be grown and sold as cannabis oil in Georgia. It was a milestone for the medical marijuana movement, since patients as of 2015 could legally use cannabis oil but had no way to buy it without breaking the law.

Passage of that law was yet another sign of the industry boom for cannabis oil and CBD oil in Georgia. Many LGBTQ people are at the center of that growth, which is appropriate seeing the role that queer people played in the beginning of the medical marijuana movement.

“If you look at the first medical marijuana legislation passed in California, it was a direct action from people dying of AIDS in San Francisco,” Colton Griffin tells Q.

San Francisco legalized medical marijuana in 1991, blazing a trail that other California cities followed until the state became the first in the nation to legalize it in 1996.

“So a group of activists there really spearheaded the legislation and got the medical program passed in California, which has grown over time,” Griffin said.

Flash forward more than two decades, Georgia is now one of 34 states with medical marijuana programs.

It’s a confusing time for retailers and consumers when it comes to the differences between CBD and cannabis oils, and what’s legal.

CBD oil is derived from hemp and contains trace amounts of THC, the drug that gives marijuana its high. It’s legal in Georgia to sell and possess the oil, so it’s available at stores and even infused into food and drinks in bars, restaurants and coffeeshops. Even so, Agriculture Commissioner Gary Black warned business and consumers in May that the FDA prohibits adding CBD to food and drinks. CBD oil is also available online at retailers including Sabaidee.

Studies have shown that CBD oil can have healing properties, such as lowering inflammation, improving bone health, lowering blood pressure, reducing pain and improving sleep. It can be used in oil form or in a cream or vaporizer pen. There’s even chewable CBD treats for dogs.

“It definitely helps,” he tells Q. “I have really bad anxiety, so without it it’s just over the edge, but with it, it just makes me feel normal. I would completely recommend it over pharmaceuticals any day.”

Cannabis oil has higher levels of THC and therefore comes under more scrutiny from state and federal officials. Gov. Nathan Deal signed the 2015 bill into law that allowed patients registered with the state to buy cannabis oil to treat eight specific illnesses. The list of illnesses was expanded to include AIDS and five other ailments in 2017. About 10,000 people are registered in Georgia as medical marijuana users, according to the AJC.

“If you look at the way cannabis is changing people’s lives, the medical stuff is not just a façade,” Griffin says. “There’s real teeth to it.”

With the legal barrier to transport and attain cannabis oil out of the way, next steps include a state-appointed oversight board to create regulations and licensing for up to six private companies to grow it. Then the seeds need to be planted and harvested, and the state needs to approve the dispensaries.

“They’ve passed the legislation to give the framework to open these businesses up,” Griffin says. “Those companies will need to build out their facilities and hire everybody and plan everything, and they’ll have retail sales. I think the goal is to have medical sales for retail patients by the end of next year.”

“It’s a pretty long process to get to market, but once you’re there, it’s worth waiting for,” he says.

The Future of Medical Marijuana in Georgia

Looking forward, business continues to boom in Georgia’s CBD and cannabis oil industries, and entrepreneurs like Griffin are making the most of it. He started Flourish in 2017 after realizing clients in those industries had challenges adapting their software to all the different rules and regulations across the country.

Flourish can now help their clients manage inventory from seed-to-sale. They have about 30 employees in eight states with another 30 working outside the country. All the core product development still happens here in Atlanta.

Flourish turned heads in August when they raised $2.1 million in a seed round, which Griffin says they’ll use for research and development, sales and marketing and staffing up. The new funding brings Flourish’s total amount raised to $3.4 million, according to the Atlanta Business Chronicle.

“We desperately needed to hire some more people,” he says. “All of us were wearing multiple hats. We added about 10 or so people in the last couple months.

Flourish’s biggest client is Atlanta startup Surterra Wellness, a CBD and cannabis oil company that has a slew of local LGBTQ employees. Surterra raised $100 million in funding in June with plans to expand its workforce from 1,500 to 2,000 employees, according to the Atlanta Business Chronicle.

That company’s employees and people like Griffin at the center of the CBD and cannabis oil boom are doing all they can to keep up with the demand.

“It’s a multibillion-dollar industry being built up overnight,” he says. “It’s chaotic, but also very exciting.”

Casual smokers are of course still out of legal luck in Georgia, but here are some quick hits showing that on a new era for CBD and cannabis oils increases acceptance of recreational and personal marijuana use in Georgia.

Cannabis herb is more closely linked to recreation and euphoria than cannabis oil and is showing growing popularity across every age group 18-70.

LGBTQ people are twice as likely to use marijuana and its relative products.

Marijuana is the most commonly used illegal drug in the United States, with approximately 22.2 million users each month.

Marijuana can affect the source of neuropathic pain — nerves — in ways that no other drug can. Studies also show effective treatment of muscle spasms, glaucoma, epilepsy and other conditions.

In the U.S., recreational use of marijuana is legal in 11 states and the District of Columbia. 14 more states have seen legislative efforts on the docket, in varying forms and levels of success.

Sales of edibles and other derivatives are up 300% since 2015. Once legal, marijuana sales typically rise 35% each year.

Pot stocks and IPOs are popping up all over the U.S. and Canada, making it the No. 1 growth market in 2018.

Studies of legal cannabis use show no upticks in use by teens or adolescents, criminal activity, traffic safety, or workplace anxiety.