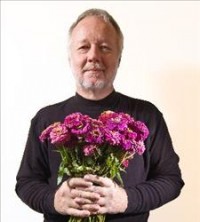 The Decatur Book Festival, set for Sept. 4-6, teams for the first time with the authors and poets of the Atlanta Queer Literary Festival. Always welcoming of literati with a decidedly queer bent in the past, the Decatur Book Festival officially recognizes its LGBT participants this year with an AQLF track of programming in downtown Decatur.

“We didn’t have to go to them; they came to us,” says poet and AQLF chair Franklin Abbott (photo). “The Decatur Book Festival is so proactive and supportive, making it possible for some of our authors to attend by offering them hotel rooms.

“We’ve come a long way, to be invited and welcomed in the world instead of being the red-headed step-children waiting on the stoop for the prom,” he adds.

Abbott, whose new book will be included at the festival, will make a co-presentation with writer Sharon Sanders. He says he’s particularly excited about the appearances of AQLF’s young Lambda Literary Award-winning guests Shawn Stuart Ruff and James Allen Hall.

The AQLF track at the festival also includes new books by local writers Collin Kelley and Megan Volpert, as well as acclaimed poet C. Dale Young. Other AQLF appearances during the Decatur Book Festival include Z Egloff, Amy King, Radclyffe, Kim Baldwin and J.M. Redmann. Check out the full AQLF schedule to see when your favorites are set to appear, or visit the Project Q Atlanta Events calendar for Saturday and Sunday.

LGBT writers Jim Grimsley, Amanda Gable, Robert Leleux, and James Hannaham are part of the Decatur Book Festival as well. Charis Books and more and Outwrite Bookstore & Coffeehouse will also honor the festival, as well as Black Gay Pride weekend. Charis hosts a Women of AQLF and Black Gay Pride meet-and-greet with authors. Outwrite hosts with a an E. Lynn Harris tribute that fetes the last work of the late author, who died this year.