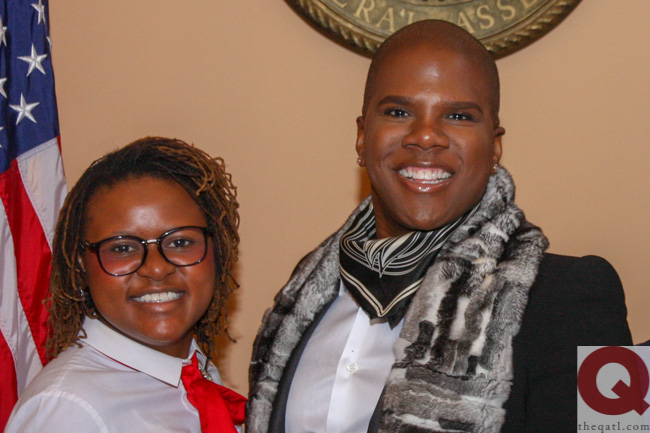 Queer state Rep. Park Cannon honored gender nonconforming actor, entertainer and activist Miss Lawrence with a proclamation on the floor of the Georgia House on Wednesday.

Miss Lawrence said he got emotional after Cannon notified him about the honor.

“What it confirmed was that while we’re all here on borrowed time, that you utilize your time wisely and make sure that you walk in full honesty and authenticity of who you are,” he told Project Q Atlanta. “It just feels good being affirmed in that way.”

It was also a full-circle moment for Miss Lawrence — he was a House page when he was around 10 years old.

“I’ll never forget running back and forth on that floor down there getting the officials their coffee and tea and papers,” he said.

Cannon said that through Miss Lawrence’s work on Atlanta Mayor Keisha Lance Bottoms’ LGBTQ Advisory Board, he “continues to show his dedication to making his home city and home state better places for all.”

She also said the proclamation was about LGBTQ visibility.

“In Georgia, where we lack legal protections for LGBTQ families in the workplace and in public accommodations, it is our duty to make visible to the community, advocates like Miss Lawrence who take a stand for equality that is inclusive of the diverse LGBTQ communities that we represent,” Cannon told Project Q.

“On the day following Jussie Smollett's unlawful and unjust attack, it has been an honor to stand with Miss Lawrence, a cast member on ‘Star’ and ‘Empire,’ a mother in the House of Balenciaga and a legislative page years ago, proving to queer kids all over the world that it gets better.”

Smollett, a black gay actor and star of “Empire,” was attacked in Chicago on Tuesday. LGBTQ state Rep. Karla Drenner denounced the crime from the House floor on Wednesday.