Queer Justice League wants to mix it up with you 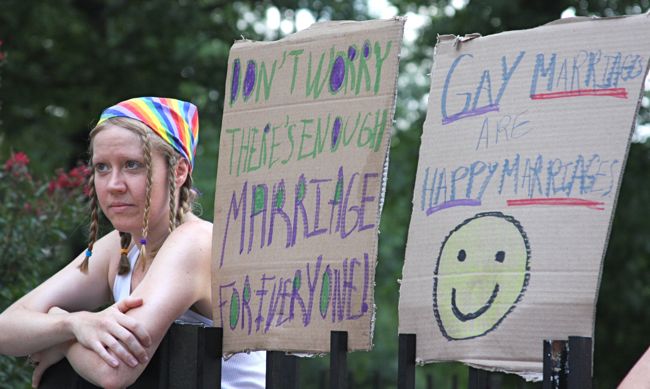 That roving band of Atlanta queer super activists that everyone loves – unless you’re Saxby Chambliss, the KKK or the National Organization for Marriage – wants you. Literally. Tuesday night.

The Queer Justice League hosts its first mixer and open meeting on Tuesday, and wants you to attend. In a church, no less. The event starts at 7 p.m. at the Lutheran Church of the Redeemer on Peachtree Street.

Have you heard of The Queer Justice League and wanted to find out more? Are you interested in becoming involved in local and national LGBT-activism and events?

It’s been a busy few months for the league. In August, they partnered with Georgia Equality and MEGA Family Project to rally against the National Organization for Marriage when it brought its bigot bus tour to the State Capitol (photo). Then they turned their sights on Sen. Saxby Chambliss after one of his staffers posted a gay death threat in the comments section of, yes, a gay blog. The group pushed for a meeting with Chambliss staffers in Atlanta and got it, as well as an apology of sorts from the conservative Republican.

Last month, the group worked with members of Proud Ally and GETEqual to counter a protest in Augusta by the KKK. Really, they are still around.

Also in October, the Queer Justice League partnered with the GA Voice to produce a series of videos for the It Gets Better campaign. The first one hit the group’s YouTube channel on Oct. 20 (below).