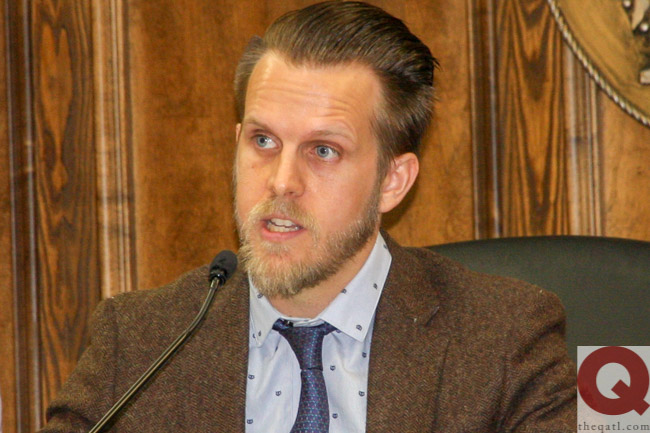 LGBTQ ally Ted Terry would make passing the Equality Act one of his first priorities if he were to become Georgia’s next U.S. Senator in 2020.

“[The Equality Act] would be one of the first bills I would sponsor or co-sponsor,” Terry (photo) told Project Q Atlanta.

The bill would amend the Civil Rights Act to prohibit discrimination on the basis of sexual orientation and gender identity in employment, housing, public accommodations and public education. The Clarkston, Ga., mayor helped pass similar legislation in the city of 13,000 in April, making it the third of now five Georgia cities to have such protections.

Terry, 36, jumped into the Senate race on July 10 with a pledge to “set the marker” on being a progressive in Georgia, according to the AJC. He joins former Columbus Mayor Teresa Tomlinson in the Democratic primary to decide who takes on Sen. David Perdue next November.

Terry said he hasn’t been eyeing the race for long.

“When we heard from Stacey Abrams that she wasn’t running for the U.S. Senate and some of the other names were put out there as potential other challengers to David Perdue, I took a good hard look at where candidates stood and where their records were on the issues and I felt there were some things that weren’t being talked about that need to be raised,” he said.

Terry has been involved in a number of LGBTQ issues since he became Clarkston’s youngest-ever mayor in 2014. He was one of four mayors in Georgia to sign an amicus brief in support of four marriage equality lawsuits at the U.S. Supreme Court in 2015. He was also one of four mayors in the state to join the Mayors Against LGBT Discrimination coalition in 2017. Georgia Equality endorsed his successful 2017 reelection bid.

He made a well-publicized appearance on Netflix’s “Queer Eye” (second photo) in 2018, getting a trim of his “resistance beard” and engaging in a rap battle to improve his public speaking skills. And he voted in favor of Clarkston’s nondiscrimination ordinance in April.

Terry also supports overturning the ban on transgender troops in the military.

“We have to push the point that gay, lesbian, transgender Americans residents and citizens should be able to serve openly in our military,” he said. “That’s an absolute must not only for fairness but for equity and equality in our country.”

Terry chalks up his support for LGBTQ rights to being a millennial.

“The millennial generation is the most diverse generation in history. It’s not surprising when you’ve grown up among peers early in your life where you have friends who are gay and transgender, that identity isn’t a big deal,” he said.

“Obviously, the fact that we still have politicians in this country who feel it’s okay to have discrimination is a complete inverse to what America believes in. I’ve grown up in a generation where it doesn’t matter your orientation or identity,” he added.

Delaying passage of LGBTQ protections is a distraction considering the other issues facing the U.S., according to Terry.

“We have a planet becoming increasingly more disruptive with global warming, we have really pressing problems and we’re still here talking about whether people should have equal access to employment protections,” he said. “There are politicians who have no urgency.”

“When you have positions of privilege and power and you choose not to exercise them for the benefit of all, then you should be removed from office,” he added.

“A lot of other mayors and city councils said, ‘That’s great, but let’s see how it goes [in Clarkston first],’” he said.

“I’m always suspicious of politicians across all parties, I have a natural distrust of what politicians say. I’d rather they show me what they believe in by what they do with their actions,” he added.

Terry criticized Perdue for his lack of openness and transparency with his constituents.

“Sen. Perdue has been in the Senate for five years and he’s never had a town hall meeting,” he said. “If I did that as mayor, I’d be recalled in a heartbeat.”

Sarah Riggs Amico and Jon Ossoff are both considering running in the Democratic primary, according to the AJC.