Queer love ends in ‘their debt, my money and our divorce’ 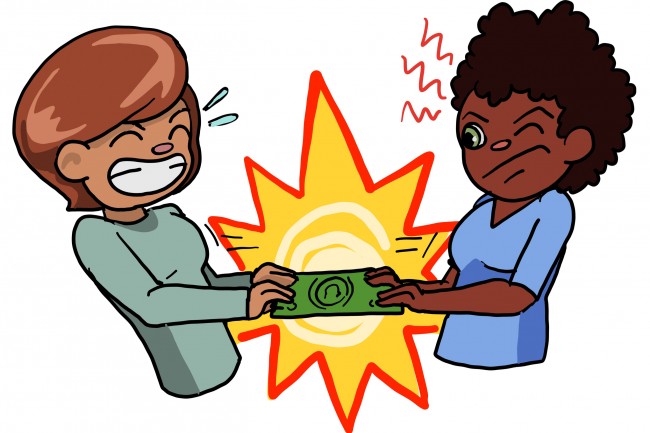 LGBTQ divorce rights and other people's salaries are strangling more than your wallet. While both are valid challenges, remedies you can pursue, and those you want to but can't, say a lot about your character.

Behind the starry-eyed specs of what I thought was love, I married my wife with no qualms about paying off her exorbitant debts. Now she wants a divorce and half my assets.

First I wiped away her student loans with a nod to our future retirement together. Then I began chipping away at her credit cards and other over-spending until she was debt free. Flash forward, and she wants the house and my retirement fund. Color me lesbian non grata and feeling played.

To make me feel even worse, I think she may have purposely snared me into paying her bills and got her talons in my own assets, while I gave away my faith in people in addition to my money.

Do I have any recourse? Please tell me there’s a way to at least get away with time served and lessons learned without sacrificing my future security as well.

First and foremost, forgive yourself. Putting your vulnerability on the line shows strength, not weakness. Even the worst-case divorce outcome would leave you with the skills that put you in a position to foot your ex’s bills in the first place, and you can rebuild.

You may never know your wife’s motives, though Dateline-level intrigue is less probable than run-of-the-mill humanness. The disorganization it takes to run up major debt often comes from the free-spirits who frequently change their minds about marriage — and everything else.

While divorce laws differ, a good lawyer — get one — is worth it when finances are contested. You can’t expect to reclaim the debts you paid, but most cases come down to a court trying to be fair. The short duration of your relationship, your financial diligence during the marriage, and the fact that she is the one asking for the divorce should play in your favor.

I always heard that it’s uncouth to ask co-workers how much money they make, but a situation at work has me questioning it.

I’m a contractor negotiating a fulltime employment offer, and a fellow queer on the staff might be able to help. Wouldn’t it be fair to tell me the number they’re pulling down so I can get in the ballpark.

Staying out of other people’s money isn’t about whether it’s tacky (It is) or any of your business (It isn’t.) It opens a can of worms you’ll never close.

If the coworker quotes their salary and it’s high, you’re going to be pissed, even though their salary is based on their experience, tenure and skillset. If you think the number is low, the look on your face may be all it takes to foster disenchantment in the co-worker or discontent among the workforce.

But the real trouble is what it says about your character. The co-worker thinks you pry inappropriately, and that you took advantage of their kindred queer spirit to do so. If it gets around, it could also tell your potential employers that you discuss personnel matters with their employees, and you get no offer at all.

Your contract rate and a pay-scale site are your best bets for the salary ballpark in your field and your market.