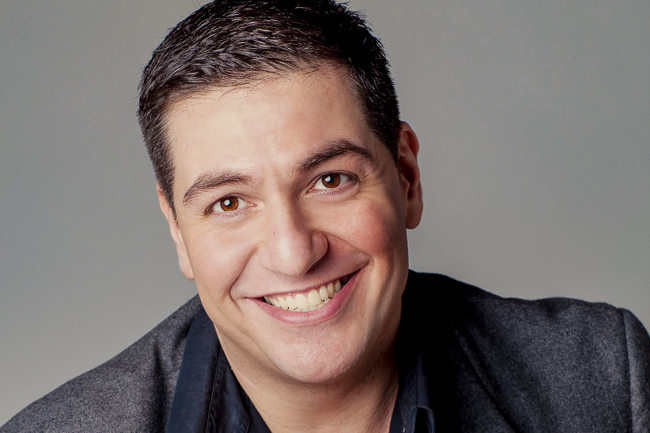 Mehran Khaghani first made a splash as a contestant on NBC’s Last Comic Standing back in 2015. Since then, he’s been captivating audiences all over the country and plans to wow Atlanta this week.

Born in London to Iranian parents, Mehran grew up in the UK, Iran, Turkey and the suburbs of Boston. He makes his local debut at Red Clay Comedy festival in East Atlanta with performances on Oct. 4 and Oct. 5. He chatted with Q about his life and career, gay “normalcy,” and what to expect from him during the festival.

How did you get started in comedy?

Faced with yet another admin or restaurant job, I decided that poverty and near constant drunkenness was preferable to getting fired for the 44th time. That’s a real number.

What is the most rewarding part of being a comedian?

The most rewarding and the most confusing part of being a comedian is the immediate positive reinforcement and loving response from an appreciative audience. For a deeply damaged person, it’s just insane what those smiling faces of shock and approval mean.

What is the worst part?

Advice you have for other queer people wanting to be comedians?

Develop a thick skin early and fight like hell. You’re on your own, baby. Be fucking undeniable — to everyone.

Make sure you’re having fun and you love it, because that’s all you have when you watch some completely evil bastard you work with get rewarded by the industry.

“Burn no bridges.” Sometimes you burn a bridge to make sure you never suffer its indignity again.

And when you burn it, burn it with the brightness of a thousand suns. Create a legend around it. Ten years from now, people who were there should remember just how you burned that bridge.

Describe your comedy in three words.

What is your pop culture obsession?

Comedians you adore and everyone should know about?

Comedians that everyone should know about that not enough people know about? Sean Patton. Jessica Kirson. Leah Bonnema. Mrs. Smith. Aida Rodriguez. Aaron Berg. No particular order, and I’m sure I’m forgetting a bunch of people. Cole Escola makes me laugh and laugh and laugh.

Self-publishing my way into the hearts of America’s fellow angry party people.

If you did drag, what would your drag name be?

Ask yourself a question here.

When was the first time you saw a stranger’s penis?

My father was a stranger to me, and I think he was inside my mother as I was being born. I had to fight to get out. Head to head combat. I’m still fighting dicks.