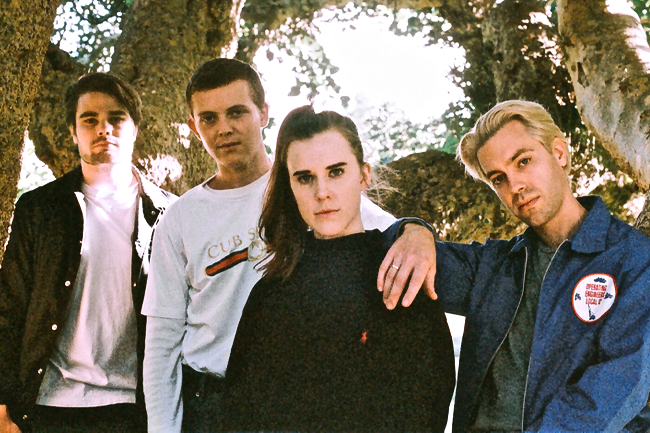 You may have never heard of Cub Sport, but that’s about to change.

Hailing from Brisbane, Australia, the band took Oz by storm, conquered the United Kingdom, and sets their sights on the States this spring with raves already coming from music bastions like Rolling Stone.

Cub Sport kicks off its first headline tour of the U.S. on Tuesday, April 3, at one of the most iconic live music venues in metro Atlanta: Eddie’s Attic in Decatur. The intimate setting is the perfect place to hear Cub Sport perform material from their latest and most personal album to date, BATS.

“The album largely follows my personal journey of coming out as gay and falling in love and all of the uncertainty and excitement that comes with navigating your 20s,” Tim Nelson, the lead singer and songwriter for the band, tells Q magazine.

“It’s been really inspiring to see the way it’s resonated with people going through the same things,” he continues. “We’ve received messages from lots of people saying we’ve helped them learn to love, accept, and believe in themselves which makes what we’re doing is all the more worthwhile.”

Nelson and Sam Netterfield, the band’s keyboardist, knew each other through school and music. They came out last year as gay and as a couple and are now engaged to be married in August. Since Australia passed marriage equality in December, Nelson says he and Netterfield appreciate the support from their fellow citizens.

“As well as being able to marry legally now, it’s just a really nice feeling knowing that the majority of the nation has our backs and believes we deserve the same opportunities as any heterosexual person,” he says.

With LGBTQ equality and visibility ever on the rise, Nelson says it is crucial for LGBTQ people to be represented in popular culture on albums like BATS.

“It reminds us that we’re not alone, especially for young people who are figuring themselves out,” Nelson says. “It’s so exciting seeing more and more queer representation, not just in entertainment but also in sports and politics.”

Cub Sport themselves also look within the LGBTQ community for inspiration.

“Frank Ocean is my number one,” Nelson says. “I adore his voice, lyrics, songs, production, videos, photos, interviews –  literally everything he does inspires me.”

BATS, the band’s second album, is a collection of songs Nelson wrote as he came to accept his sexual orientation and his feelings for Netterfield.

“Stylistically, our second album is a bit more chill and alludes to some R&B/soul influences,” Nelson says. “I’ve also become more confident opening up with my lyrics, which has had a big impact.”

The album made a splash Down Under and spawned three buzzy singles in their homeland: “Chasin’,” “Good Guys Go,” and “O Lord.” All three feature videos awash in color and have a retro vibe. “O Lord” is incredibly sensual with Nelson, Netterfield, guitarist Zoe Davis (who is also out), and drummer Dan Puusaari serving dewy glam-rock realness.

For the tour, Nelson the band is excited to show Cub Sport’s growth .

“Our live show has developed a lot since we last played in the U.S.,” he says. “We’ve upped the production quality, and I feel like coming out has led to a new confidence and calmness around performing that wasn’t there before.”

Nelson, who describes the band’s music as “emotional-pop,” is anxious to start the tour here.

“I’m so excited, it’ll be our first time playing in Atlanta!”

This article originally appeared in Q magazine. Flip through the digital version below, and pick up a new issue each week.