Queer Atlanta rapper Ripparachie ‘would risk it all for equality’ 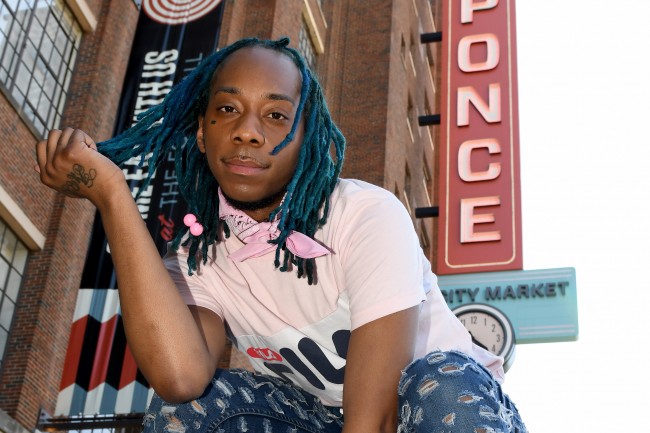 Westside Atlanta resident DeMarquis Oden, better known as Ripparachie is back from a music break and ready to own the streets. Q is here for it.

The Indiana-born trap artist who burst out of the closet in 2012 with his album “F.A.G. (Free and Genuine)” has been compared to Lil B and Gucci Mane. In Atlanta, he’s performed such recent gigs as the ATL is Burning Ball back in November withSouthern Fried Queer Pride and Morph.

After finding success with SoundCloud hits like “Twerk Like Ashton,” Ripparachie took a long break in 2016, but returned to making music again last summer. He released the single “Bouncing” in January.

The artist sat down with Q to talk about his origin story, the reason for that long break, his prominent facial tattoo, and his plan to “turn up the world and end the shade.” He also joined staff photographer Russ Youngblood for the photo shoot on this week’s cover, in the photo above, and in extended outtake shots in the gallery below.

Where did the name Ripparachie come from?

I was going by the name of Lil Rippa back when I was inspired by battle rap. The Rip part comes from what I started calling myself after I found my grandmother during her untimely demise.

The Rachie part comes from my late brother Feenie Roc, who I mention in most of my music. He started calling me that because of me being flamboyant and always wearing bright colors. This was way before I came out of the closet.

I was young and didn't realize he was saying it because of Liberace. So in a way, it was a take on Liberace. When I found out about Liberace, I ran with the name because I knew I would come out one day.

When I moved to Atlanta, I came to focus on music. I ended up being in the streets of Atlanta more than the studio. During [the break], I canvassed on behalf of the Human Rights Campaign here in Atlanta. Yeah, I was the annoying person on the streets asking if you had a minute for LGBTQ rights. Doing that type of work was draining because of all the people that judged us even though we were risking our lives for a good cause.

On top of that, I got into the party scene heavy, so I lost focus on releasing music. It was a few things that helped me get back into releasing music. One was my older brother, Kaddy Kobain, moving down here. He is my main producer, and we started working on a project calledTrippy Cunt.

But what really motivated me to start taking music seriously again was this local rapper named Lord Narf reaching out to me on Twitter. She and her Awful Record friends inspired me to give rap another shot.

A couple of months after meeting them, Candy Ken reached out to me for a verse. So, I have been slaying things ever since.

You’ve talked about being a force for queer people in Atlanta. What does that mean to you?

When I moved to Atlanta, I was walking down this block and was told that I'd start being beat up if I keep bringing that gay stuff over there. Long story short, I still walk down that block in booty shorts.

Also, when I canvased on behalf of HRC, I felt like I was on the front line for queer folks. I feel like I would risk it all for equality. Which is the reason why I got the equal sign tattooed on my face. I stopped canvasing, but I continue the fight using my music. Someone has to fight back.

Who are some of the other out-and-proud rappers on the Atlanta scene?

There are other talented queer artists like Divoli S'vere, Kaius and Jamee Cornelia, just to name a few that I know personally. There are also definitely a lot of closet cases, but I won't be the one to spill the tea.

I will continue dropping singles every couple of weeks. I have three projects finished, so look out forTrippy Cunt,Pink Panther Partyand the joint project with Lord Narf calledTeam Rocket. I also have a big bop produced by Kaddy Kobain called “Love Me Long Time” featuring Father that will shake this summer up.

As for life, I just plan on turning up the world and ending the shade in the community. I want to break all the barriers down and still keep it cute.

Visit Ripparachie onSoundcloud,YouTubeand on Instagram, and don't miss the gallery of photos from his Q shoot with staff photographer Russ Youngblood below.

Back in November, LGBTQ-owned Agatha’s A Taste of Mystery was on the brink of permanent closure amid COVID-19 restrictions on business. In April, the...
Read more
Q Advice

Coming out bi, trans, poz? When, why to share your queer truth

Full disclosure can be the right thing to do, but knowing the right timing and reasons to be upfront is trickier. Coming out gay, trans or poz in The Q advice column.
Read more

UPDATE | The story was updated to reflect the latest details on a vigil planned for May 12 and where Vasquez lived. A 36-year-old Latina...
Read more
Community