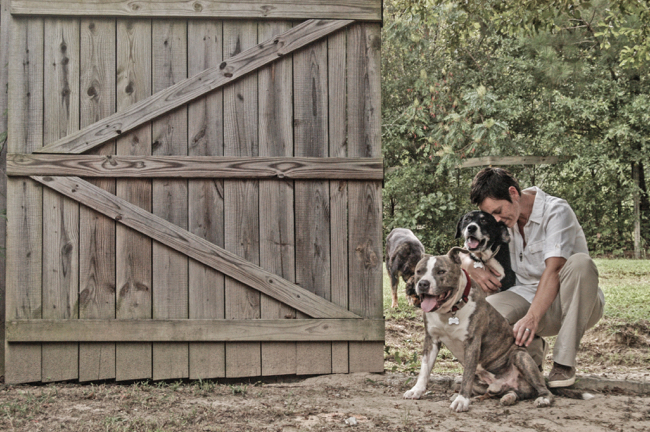 Whether you realized it or not, you already know the work of Q contributor James L. Hicks. His cover features on LGBTQ Atlanta groups for this magazine – Dykes on Bikes and Sisters of Perpetual Indulgence so far – are just the tip of a photographic iceberg 30 years in the making.

After stops and starts with other career ideas at Morehouse and an internship for a forensic photographer in Atlanta, then a photography assistant job in his native Washington, D.C., he began a prolific career that includes his own coffee table books and gigs with big name celebrities, famous drag queens, and tons of shots highlighting his passion for animals.

To wit, he exposes his lens to queer Atlantans and their love for dogs in the current issue of our Q magazine. Meet his latest subjects and their four-legged friends, including a self portrait with just a few of his dozens – you read that right – of animals who live at his metro Atlanta home.

As for those more famous faces, and there are many, Hicks does have a few favorites. Erykah Badu, Smokey Robinson and Pam Grier are among them.

“The late Aaliyah, Alicia Keys, Deborah Cox and actress Rosario Dawson were the sweetest, most kind and down to earth artists that I worked with,” he says. “Usher was a lot of fun to work with and a really cool guy.”

“I watched one episode of RuPauls Drag Race, and that was my inspiration for Drag Dolls, Dames &  Divas,” Hicks says. “I was so blown away by these artists creativity in creating their characters. I knew it would be a brilliant collaboration.

But there are other photo books by Hicks that informs the spread in this issue, and gives us the biggest insight into Hicks as an artist and photographer.

“I combined my love of dogs and my love of photography to create Dog Face Pet Portraits,” he says. “Now I'm working on finding a publisher for my Dog Face series of books. Dog Face: Pooches & Prose is in two volumes of over 350 pages of beautiful images of dogs combined with quotes from famous, as well as, not so well known, dog lovers. The project includes some of the most popular breeds in the world as well as some of the rarest.”

Read our full interview with Hicks under his portrait, and enjoy the other pet parents he captured for Q magazine.

Three words for what he was going for in the feature, Hicks says: “Love, devotion and family.”

Bliss rescues senior and special needs dogs and is expanding to Five Freedoms Farm to partner with the deaf community to run it.

Jessie and Nancy with Pippa and Pearl

With Bulldogs Laney and Echo

With Italian Greyhound Sophi and his Basenjis Liya and Louie.

How long have you been a photographer? When did you know that’s what you wanted to do?

I have been a photographer for nearly 30 years. I never thought in a million years that I would be a photographer. Actually, I have always loved animals and I wanted to be a vet. I attended Morehouse College and majored in Biology/ Pre Med. I realized it wasn't meant for me to be a vet because I flunked physics 3 times. Besides having a passion for animals  I also had a passion for art and fashion. I changed my major from biology to Medical Illustration my senior year so I had to do an extra year. My final year the only classes I had to take were art classes and photography was included. I did an internship with a forensic photographer and she saw something in me. She told me I was gong to be a photographer. I pretty much dismissed it, but I guess she must have been put on my path to plant the seed. After graduating , I moved back home to Washington, DC  and I became a photographers assistant. Within a year and half I branched out on my own and began my freelance career.

What do you look for in a subject/What makes a good person to work with?

What I look for in a subject really depends on who or what the subject matter is. When I photograph models I am not really drawn to cookie cutter beauties. I love unique, quirky  models. For me they make the most interesting images. When I photograph drag queens, I definitely appreciate all types of drag, but  I'm most interested in those girls that have an edgy, creative, and fun aesthetic . I love over the top costumes, make-up and wigs.

You have photographed many huge-name celebrities. Who were some of your favorites, and why?

I would have to say my favorite celebrities I have photographed are Erykah Badu, her style, energy , and comfort in front of the camera was incredible. The late Aaliyah,  Alicia Keys, Deborah Cox and actress Rosario Dawson were the sweetest, most kind and down to earth artists that I worked with. Usher was a lot of fun to work with and a really cool guy. I was absolutely honored to photograph legendary R&B Icons Smokey Robinson  and The Sister Sledge as well as, actresses Pam Grier and Lynn Whitfield. They were all extremely humble and professional.

You’ve also shot some of the biggest names in drag for your Drag Dolls, Dames & Divas books. Drop some names, and tell us, What is it about drag queens?

I had the great pleasure to work with several girls from RuPauls Drag Race. Manila Luzon, Tatianna, Alexis Mateo, Yara Sofia, and Shangela were definitely some of my favorites. When I decided I wanted to create a project in book form, I initially wasn't sure what my subject matter would be. I watched one Episode of RuPauls Drag Race and that was my inspiration for Drag Dolls, Dames &  Divas. I was so blown away by these artists creativity  in creating their characters. I knew it would be a brilliant collaboration.

I really wanted this body of work to be different from what I had scene already. I decided to shoot mostly on location and place the queens in locations you wouldn't normally associate a drag queen with. For example I photographed queens at the beach, in construction sites and even on a golf course. I really approached this project as if I was shooting models for a fashion shoot.

You're pictured with just some of your dogs. What's your favorite thing about their personalities?

My dogs in the photograph with me are Sophia (Italian Greyhound), Liya and Louie (Basenjis). Not shown are my Azawakh, my salukis or my cats. All of my dogs' personalities are so unique. My Italian Greyhounds are a bit more timid and very sweet. My Basenjis are really strong willed,  smart and hard-headed but they absolutely love people. My Salukis and Azawakh are more sensitive and can be a bit more aloof with strangers but they are super affectionate with me. My cats are cats. I have a 22 year old girl , Sugar, who I have had since she was kitten and a 12 year old girl by the name of Blanch.


What else? Anything else you’d like to say to LGBT Atlanta about you or your work?

I am a native of Washington DC. . I started showing dogs in Junior Showmanship when I was 14 years old. I stopped showing when I went to college and began to pursue my career goals. I began showing again  and also breeding when I turned 40. I was a successful Natural Rearing breeder of Basenjis and French Bulldogs. I successfully bred 3 generations of champion Basenjis. I am very much into holistic health care and feed my dogs and cats a raw diet which  have been doing for the past 17 years.

At-A-Glance LGBT and LGBT-friendly resources with our compliments

More than a dozen locations including

This article originally appeared in Q magazine. Pick up your hard copy around town, and read the full issue below: