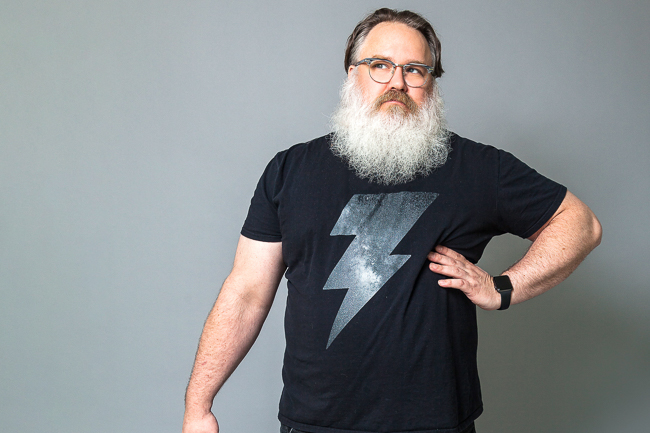 Atlanta comic and show runner Ian Aber is closing in on a decade in stand-up comedy talking about what he knows best — being queer and feeling on the outside of society.

“My comedy is about my experiences as an outsider and the feelings of otherness often associated with being a minority and how I overcome, subvert or deal with that throughout my life,” he told Q.

It sounds like heavy stuff, but it’s also oh-so funny.

Aber will explore that territory and more on his first comedy album, Night Sugar. The album, which is available for pre-release on Sept. 15 and a full release on Oct. 1, was recorded in April at Star Bar.

Aber, who is also a regular Q Voices and Q Features contributor, chatted with us about his inspiration, preparation, “success sweats,” and learning to trust himself.

What inspired you to release your first comedy album?

I was having a conversation with another comedian who was about to record their second or third album and they said it was a benchmark for where they were in comedy that they could look back at and I liked the idea of capturing a moment in time in this career that I have turned my life upside-down to pursue.

I don't consider myself done with my development as a comedian, but I am at a point where I have a good range of material and the ability to generate more, so recording an album seemed like a natural next step for me.

How much preparation went into putting the album together?

I spent about four months doing as many 30-minute to an hour sets as I could to prepare, which involved a lot of out-of-town travel for shows and coordinating with producers and bookers. As much as stand-up comedy seems to be a solo sport, it truly is a collaborative effort in terms of being booked on shows, and I am lucky to have good relationships and a decent reputation as a comedian to get that kind of help.

How did you come up with the name for the album?

Night Sugar is a nickname my husband has for me and while that may seem really sweet, I tell a joke about the circumstances that got me that nickname and it has been my most popular joke for years. So when it came time to name the album, it was the most obvious choice.

You’ve said it took 38 years to get OK with talking in front of straight people. Do you still get anxious before a set?

My biggest hurdle was the fear that a straight audience would never accept me as a gay person as an equal, that I would have to do some kind of minstrel mincing stereotype to be accepted.

I still do get anxious before sets, but in a more productive way than the sheer dread and flop sweats I would have every time I got on stage for the first couple years. I mean, I still sweat but now it’s success sweats.

You’re closing in on a decade in comedy. What have you learned?

To trust and value myself through this process. I spent a lot of years trying to work out daddy issues with various senior VPs in corporate jobs to some financial gain but no fulfillment, and pursuing comedy has really been a way for me to see my own true worth but also be reminded I have much left to learn along the way. I also learned that I experienced more trauma at the hands of straight people as a child and teen than I was really willing to admit to myself, and I’ve taken steps to work through it in the past few years specifically.

What advice would you give to someone looking to get into comedy?

If you have spent your life so far being told you are funny, even when you don’t mean to be, then do it. I would say the most important lesson I have learned is to not take anything personally and know that rejection is just the other side of the coin to laughter and adoration.

Where and when can people see you perform?

I host a biweekly comedy showcase at Urban Tree Cidery most first Fridays and third Saturdays that is a lot of fun and the cider is amazing. I’ll be on their float at Pride again this year. I’m also a pretty regular performer at Laughing Skull Lounge in Midtown and Ten Buck Comedy weekends at Highland Ballroom Inn.

I’ll also be in the Red Clay Comedy Festival Oct. 4 and 5 in East Atlanta Village and I’ll be recording a set for an upcoming Amazon Prime series in November.