LGBTQ and allied singers release sounds of the season 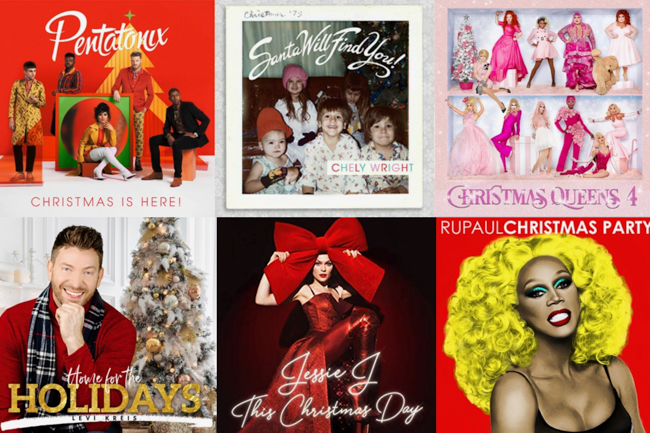 Each year, a diverse array of artists releases their holiday albums. Some are traditional and safe while some are wildly experimental. Hre are just some of the queer and LGBTQ-friendly options to freshen up your holiday playlists.

Out singer Levi Kreis posted for months about the fun he had in the studio making Home for the Holidays, his first Christmas album. The Tennessee native and former Atlanta Pride performer mined his roots in country, gospel, rockabilly and blues for the album.

The effort reunites the Tony Award winner with fellow Million Dollar Quartet cast member Eddie Clendening. Kreis originated the role of Jerry Lee Lewis in the Broadway musical, and Clendening originated the role of Elvis Presley. The pair channeled those alter egos for a rollicking version of “Run, Run Rudolph” that would have fit right into the musical.

Out country singer Chely Wright swung for the fences with Santa Will Find You, a five-song EP with all-original holiday music. The lesbian singer/songwriter/author/activist mined domestic tranquility, loneliness, heartache and nostalgia to create instant classics.

Her lyrics are descriptive, powerful and evocative, whether of a time gone by, an emotion once felt, or the child-like anticipation of the holiday season. Richard Marx, a frequent collaborator of Wright, duets on both versions of “Christmas Isn’t Christmas Time.” Wright plays Eddie’s Attic in Decatur on Dec. 12.

Queer-led acapella group Pentatonix released Christmas is Here!  for their third holiday album. It includes Kelly Clarkson on “Grown-up Christmas List” and Maren Morris on “When You Believe,” but the quintet’s signature arrangements take the focus on the other tracks, including the inventive “Waltz of the Flowers” from Tchaikovsky’s “The Nutcracker.”

RuPaul, this week’s Q cover girl, released Christmas Party, an album with remixes from “Slay Belles” and some spoken word interludes. “Hey Sis, It’s Christmas” provides an anthem to get your crew pumped as you hit the holiday party scene, and “Christmas Queen” tops a few other tracks sure to be featured in Ru’s “Holi-slay Spectacular” Christmas special, airing on VH1 Dec. 7.

Speaking of Mama Ru, Ghosts of Drag Race Past past assemble for Christmas Queens 4, the annual holiday album featuring RuPaul's Drag Race alumnae. Other volumes of this annual treat skewed more towards parody songs set to holiday tunes, but this one features mostly straightforward (pardon the pun) takes on holiday classics.

Jinx Monsoon shines on “Jungle Bell Rock,” and Alaska Thunderfuck delivers “Santa Baby” as if she’s a character in “The Nightmare Before Christmas.” Don’t worry, the queens want you to move for the holidays. Dance versions of Christmas favorites come from Blair St. Clair and Kameron Michaels, so you can shake your booty as you deck the halls.

Likewise, Bebe Zahara Benet puts her … unique … vocal spin on “The Little Drummer Boy” (“I bring the beats, I bang the drums/ Ram-pa-pa, ram-pa-pa-pum”) A very autotuned Eureka O’Hara performs a dance version of “Grandma Got Run Over By a Reindeer” that’s as bizarre as you think, but kind of like tacky Christmas decorations – a guilty pleasure.

LeAnn Rimes continued her evolution as an artist with It’s Christmas Eve, a Hallmark movie in which she stars. The soundtrack contained original tunes and classics but with a twist, as well as new songs “You and Me and Christmas” and “It’s Christmas Eve” as excellent additions to any holiday playlist. Remixes of some of the tracks are pleasant surprises.

I admit, a soundtrack to a Hallmark film was not where I expected to find my new favorite dance track, but the Jolly Remix of “Joy” (a medley of “God Rest Ye Merry Gentlemen,” “Angels We Have Heard on High,” and “Hark the Herald Angels”) had me bopping. Note to record label: we need a dance remix single for this song ASAP! “Christmas Jam on Snow” is an excellent mash-up of several classic tunes.

This feature originally appeared in Q magazine. Read the full issue below.

Look for a new edition of Q each week, and check back here every day for fresh content on theQatl.com.