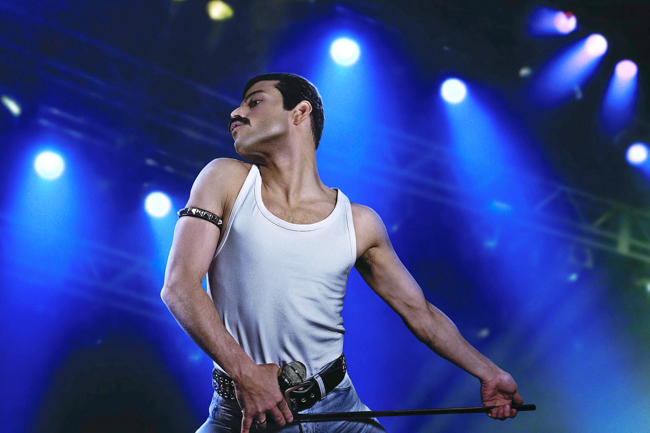 Freddie Mercury is a must on any list of important queer icons. He was creative, bold, audacious, groundbreaking, revolutionary and beguiling. His band Queen deserves many of the same descriptors as its lead singer: unique, larger-than-life, captivating. A movie about them is a tall order, and Bohemian Rhapsody delivers Queen realness in spades.

I was prepared for the expansive biopic to be “okay,” and I worried it might not be good at all. I also heard rumors that it “straight-washed” Mercury’s life story and didn’t deal well with his AIDS diagnosis. I’m thrilled to be wrong on all counts.

Jim Beach, longtime manager and attorney for Queen, is one of the producers. Queen founders, lead guitarist and drummer Brian May and Roger Taylor respectively, serve as creative consultants and were on set for much of the filming.

Under their guidance, Rami Malek (“Bad Robot”), Joseph Mazzello (Tim from “Jurassic Park,” all grown up), Ben Hardy (Angel from “X-Men: Apocalypse”) and Gwilym Lee turn in pitch-perfect performances as the band. Lucy Boynton (“Murder on the Orient Express”) gives a tender performance as Mary Austin, the one female love interest in Mercury’s life, and it was delightful to see Aidan Gillen (Littlefinger from “Game of Thrones”) in a likeable role.

Just to save you time as you wonder “Who is that guy?” while you watch, Mercury’s manager Paul Prenter is played by Allen Leech (Branson from “Downton Abbey”) in a ‘70s wig and mustache. You’re welcome.

The filmmakers do an excellent job with casting everyone in the film, but Malek truly shines as Mercury and earns all of the awards buzz generated by his performance. If there is any justice in Hollywood, his name should be among actors nominated for an Academy Award. He worked with a motion coach to perfect Mercury’s iconic head tilts, eye movements, hand flicks, and stage performances. Malek fully embodies the role.

In a scene from the band’s early years, Queen describes themselves as a band for outsiders. Malek does a beautiful job of portraying Mercury’s proud other-ness in the film. Coming to terms with his family’s cultural identity and expectations and his sexual orientation creates some powerful and emotional scenes. We may think of “intersectionality” as a new concept, but LGBTQ people like Mercury have been dealing with their hodge-podge of identities forever.

The film deftly moves between quiet moments (Mercury and Austin at home, Mercury testing positive for AIDS) and seismic musical explosions you expect in a rock-n-roll film. It also offers delightful looks behind the scenes, like the time the band negotiates the content of “A Night at the Opera” with a record executive, played by Mike Myers (whose use of “Bohemian Rhapsody” in “Wayne’s World” would introduce the song and band to a whole new generation of fans), as well as the hilarity of Mercury explaining his vision for the track “Bohemian Rhapsody” and the band’s unconventional methods recording it.

No spoilers, but there are huge moments in the film that encapsulate the meaning of the words “epic” and “awe-inspiring” worthy of the singer and the band. While there are incredible moments that will thrill your spirit, there is also the other side of that coin in the form of heartbreak and tragedy: Mercury figuring out he’s gay with his wife, and our creative queer pantheon’s loss of potential when he died of AIDS-related complications in 1991 at the age of 45.

Yes, the film brings the sting of loss, but Bohemian Rhapsody stands as a testament to the rapturous joy of Mercury and Queen. It is a fitting celebration of their music, and the story is finely crafted and executed.

The lyrics of the title track begin “Is this just real life?/ Is this just fantasy?” This film shows that it wasreal life and it is fantastic.

This review originally appeared in Q magazine. Read the full issue below: