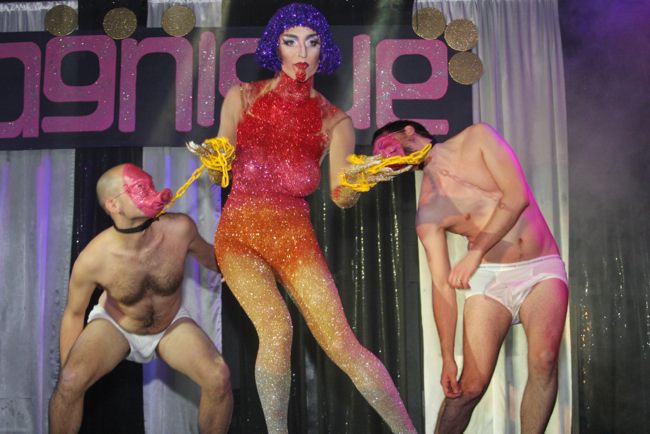 Edie Cheezburger mastered gluttony with help from a few chubby friends to continue her dominance atop the Dragnique competition at Jungle on Wednesday.

Tips and votes from fans helped Cheezburger win this week’s competition, which focused on the Seven Deadly Sins. With just six of the nine queens that started on March 7, Pride was left without a paring. 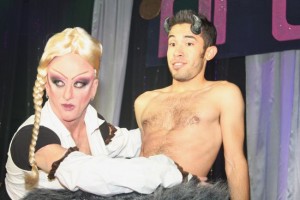 Cheezburger (top photo) didn’t miss a beat, pulling a handful of guys wearing only piggy masks and white briefs around the stage as she worked her number. The judges — and more importantly the audience — loved it. Cheezburger has now won each of the three weekly competitions so far.

Who sashayed away? Elea Atlanta, who joined Prima Alexandria, Angelique Simmonz and Christina Payne Crawford in being cut from the competition.

On March 28, the remaining competitors take on celebrity impersonations.

What becomes a legend? When the legend is Lily White, it’s a roomful of faithful followers to remember the life of one of Atlanta’s...
Read more
Nightlife

Of the memorable queens on Rupaul’s Drag Race Season 12, perhaps Muppet stuntster Crystal Methyd is the oddest. That makes her perfect for the...
Read more
Photos

First, the LGBTQ and allied jocks of National Flag Football League of Atlanta whittled their teams down to a final four. Then those matchups...
Read more

They’re back, and you love it. Get ready for a prodigal return, notorious return, infamous return and a triumphant return to Atlanta’s LGBTQ events...
Read more
Q ATLus

The gay and allied jocks of National Flag Football League of Atlanta aren’t done with 2021 yet. On the heels of their season championship...
Read more
Q ATLus

The heat of summer meets its match in this week’s Q ATLus magazine. Heretic's hot weekend on the cover opens up on hot topics including eight...
Read more
News

Kimora Blac wows the After Dark crowd at X Midtown