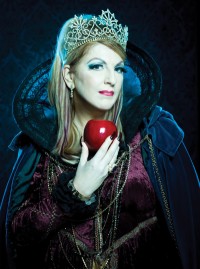 Comedy’s Queen of Mean Lisa Lampanelli isn’t slowing down. The author, comic and equal opportunity offender is balling up barbs to hurl on Saturday at Cobb Energy Performing Arts Centre, and we’re giving away three pairs of tickets.

But before we tell you how to snag free tickets, let us whet your appetite with a little reminder of exactly who this self-proclaimed ballsy bitch is:

Pretty much from the moment Lampanelli (photo) made her splash on her first Comedy Central roast in 2002, gays who love bitter insults began perking up to find out more. By the time she appeared on the network’s “Last Laugh” in 2005, she was cementing her status as a queen among queens for saying what even the most daring of us would be afraid to think.

But that was just the beginning. As Lampanelli racked up credits all over TV—from late night talk to her own cable specials and command performances at celebrity roasts—her live one-woman gut-busters led to a Grammy for Best Comedy Album in 2007. By 2009, when her “Long Live the Queen” show and the book “Chocolate, Please: My Adventures in Food, Fat and Freaks” hit, fans were hooked.

Just this week, Lampanelli was a presenter on Logo’s big gay NewNowNext awards. She returns triumphant to Atlanta on Saturday on the heels of her Comedy Central special “Tough Love,” featuring her latest round of pull-no-punches insult comedy and in-your-face humor.

You can buy tickets online now, but the Cobb Center wants three lucky Project Q Atlanta readers to grab a friend see the show for free. Here’s how: