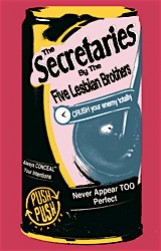 Two of the productions spring from the New York-based, all-female theater company The Five Lesbian Brothers. “101 Humiliating Stories” by the troupe’s Lisa Kron is a one-woman show in which Kron’s alter ego, a lesbian East Village performance artist (played PushPush’s Shelby Hofer), talks about the anxiety she feels prior to her high school reunion back in the Midwest.

“I had wanted to work with Shelby for a long time, and I thought this was a great fit for her sensibilities,” Keller says. “Essentially, it’s a series of stories about how Lisa feels she is humiliated by everyday occurrences, from passing out in a hallway, to a visit to an emergency room. It’s really about her inability to feel comfortable in her own skin.”

Hofer, in turn, directs “The Secretaries,” which is a much broader comedy that takes place at the Cooney Lumber Mill in Big Bone, Oregon. As written by the Five Lesbian Brothers, it follows a group of women in a secret society, the Big Bone Organization for Women.

According to Tim Habeger, artistic director of PushPush, to get into the society one has to kill a lumberjack. A new recruit throws chaos into the tight-knit group of Slim Fast drinking, big-haired secretaries.

The show’s themes include office politics, female empowerment and flannel, says Habeger. He calls the lesbian-filled “The Secretaries” a satire, one that is for mature audiences.

Rounding out the trio of PushPush offerings is Edward Albee’s “The Zoo Story,” one of the legendary gay playwright’s early works. The company stages the show as part of its Dark Night Masterpiece series.

Peter (Charlie Adair) is a publishing executive with a wife and kids, and Jerry (Habeger) is an isolated man he meets one day at a park bench. Jerry is in need of a meaningful conversation/connection, and the two men talk before unexpected violence ensues.

Written in 1958, the one-act play is a bit dated, but does contain a gay character unusual for the time in which it was written. Habeger says he has long been a fan of Albee’s work and feels “The Zoo Story” is still relevant.

“It’s a pre-Stonewall piece, before most of the civil rights movement,” he says. “It seems like people then had a hard time with the changes that were going on in the country, as social elements were beginning to mix.”

PushPush, which incidentally is straight-run, includes gay-themed material in their schedule each year. They and the rest of the troupe have long featured a mix of straight and gay artists, and diversity has always been an important factor in their output, Habeger says.