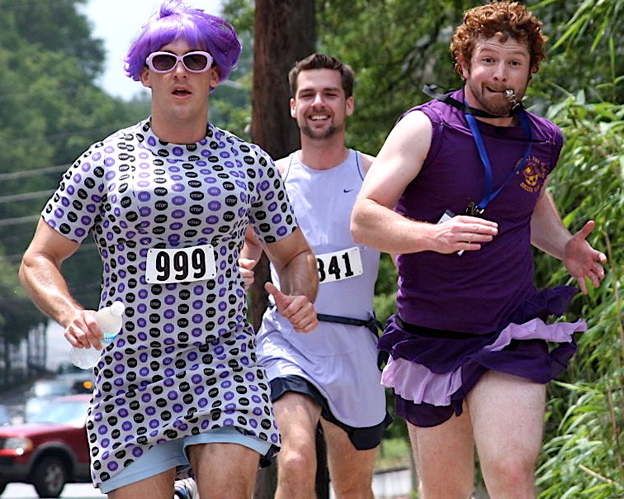 If you haven’t seen a group of nearly 125 people — mostly gay men — adorned in purple dresses, you just can’t fully appreciate an event that unfolded Saturday in and around four bars and restaurants in Midtown.

The Purple Dress Run, a fundraiser from the Atlanta Bucks Rugby Football Club in its third year, drew its largest crowd yet for the 5K run-walk.

Here’s the premise: The gay rugby club raises funds for itself and YouthPride by convincing participants to pull together their best purple outfits, pay $25 to $30 and do a bar crawl around Midtown. Some folks run from bar to bar, others walk and still others hop in a car and meet them at the next spot. On Saturday, things kicked off at Blake’s around 12:30 p.m., where a few drinks helped smooth the way for the next step — walking and running from there, along Piedmont, to Burkhart’s.

Quite a few drivers honked what we think was their support. After more drinks, it was up Monroe to Amsterdam and then the final stop at Frogs Cantina.

In the end, organizers say their preliminary counts on Saturday show about 125 people took part and helped to raise more than $3,000.