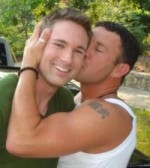 With the gays in Atlanta preparing to pucker up for the Great Nationwide Kiss-In, our queer neighbors in Athens didn’t want to be left out.

So they’ve announced their own event to coincide with those happening across the U.S. on Aug. 15. They’ll lock lips at 1 p.m. in College Square, according to a Facebook event invitation sent Friday.

The Atlanta event is set for 2 p.m. at the Piedmont Park visitor center. The nationwide effort, launched by two bloggers in the Northeast, is a cyberoots protest over the arrest earlier this month of a gay couple nabbed for kissing in Salt Lake City.