Protests over gay ban growing at Shorter U 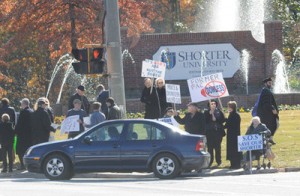 The spotlight is on you today, Shorter University President Don “No Homo” Dowless. Your loyal, non-gay subjects have your back while more than 100 people clamor against your gay witch hunt. Happy inauguration!

A protest on Thursday attracted just a handful of people and a bomb threat that cleared the small campus in north Georgia. On Friday, more than 100 people showed to protest the school’s efforts to rid the gays from its employee ranks. They hoped to gain some additional exposure as Dowless sits for his formal inauguration as the school’s protector of its non-gay Christian morals.

Supporters of Dowless and the school’s new Personal Lifestyle Statement were also expected to gather around campus to counter those gay, cocktailing, pre-marital sex having ones and their friends that are upset over the new ban on gay employees who get their groove on. 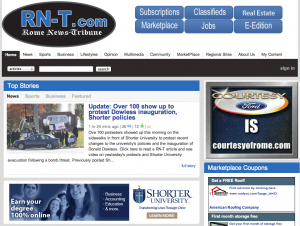 In the meantime, some of the trustees that put in place the gay ban now say they would sign it, even though it’s intended just for employees. Huh. Maybe they should have thought of that already.

“Every denomination would have gone along with that statement 50 to 75 years ago,” said Battles, who has been on the board for 20 years. “But they’ve gone away from the Bible.”

See, gays, you really are just living in the wrong decade. Shorter wants to remain in the 1950s and 60s when you did the nasty on the down low at the YMCA and in bars that the cops raided without consequence — not in the employee break room on their campus.

One ironic twist to the debate engulfing Shorter. The local paper, the Rome News-Tribune, has aggressively covered the flap and even criticized the school for it in opinion columns. But as the Shorter coverage topped the paper’s website on Thursday and Friday, it sat above a big fat banner ad for Shorter and its slogan, “Transforming Lives Through Christ.” (Click image for larger view.)

Amen. Now back to that witch hunt.