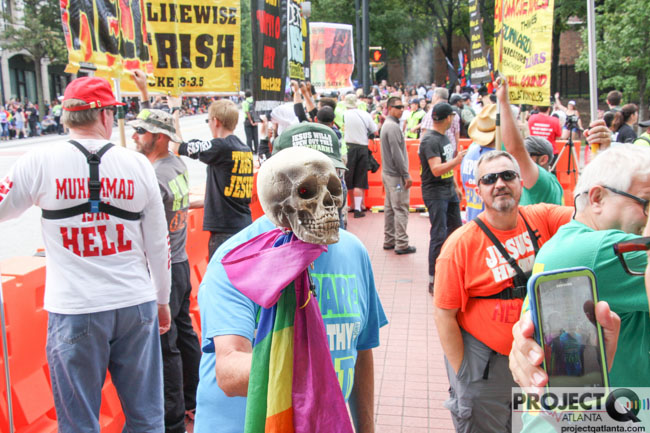 A group of about two-dozen anti-LGBT protesters carried vulgar signs and taunted the Atlanta Pride parade on Sunday, using a bullhorn to urge “wicked, dirty homosexuals” to repent.

The street preachers – a loose coalition led by Ruben Israel that trolls Pride festivals, sports events and nightclubs – also interrupted the Comedy Showcase hosted by Julie Osborne and harassed participants in the Trans March on Saturday.

The protests were countered by the Pansy Patrol, which used their giant flowers and noisemakers to try and drown out anti-LGBT activists during the parade. Atlanta Pride officials said the protests did little to disrupt an otherwise successful event.

But from behind barricades at the intersection of 10th and Peachtree streets where the parade turns into its final stretch, protesters including John McGlynn (top photo) went on and on arguing that homosexuality is a sin. McGlynn carried a fake skull on a stick with a rainbow flag that he called “Linda the Lesbian Labia Licker,” who had already burned in hell.

“We’re here as forgiven sinners, sanctified by the holy ghost, calling all these wicked, dirty homosexuals to repentance and faith in Jesus Christ,” McGlynn said.

“The Bible says they deserve, they are worthy of death,” McGlynn said when asked what should happen to Pride attendees. He added that he hopes they repent.

The anti-gay protesters are a Pride tradition and have grown more volatile in recent years. In 2016, some of them tried to block participants in the Trans March. A year earlier, a group led by Israel broke from other protesters, interrupted the parade and walked along 10th Street under police escort.

On Sunday, police officers quickly intervened during a few tense moments when arguments between protesters and Pride attendees grew heated.

Many of the revelers who stopped to engage with the protesters offered hugs and an occasional kiss. Protesters declined those offers. Bubbles also made an appearance on at least one occasion, likewise drawing disdain and anger from protesters.

One particularly angry protester, who declined to provide her name, called attendees abominations, with a wrath that was hard to miss.

“You’re an abomination, step back nasty lesbo. You’re abomination to God, you’re a shame to your daddy, and your womb will never ever hold children. Shame on you… repent or you are going to perish in hellfire,” she said to one person who told her they are transgender.

One Pride-goer was brought to tears after seeing the protesters. She said that she had a close friend who committed suicide over people like the protesters. Her friends quickly rallied around her.

“A couple of minutes ago I was starting to tear up,” she said. “My best friend I had, he passed away because of these people.”

“Don’t let them see no fucking tears,” her friend said. “Fuck them, fuck their beliefs. It’s sad, it’s disgusting that they feel that way.” 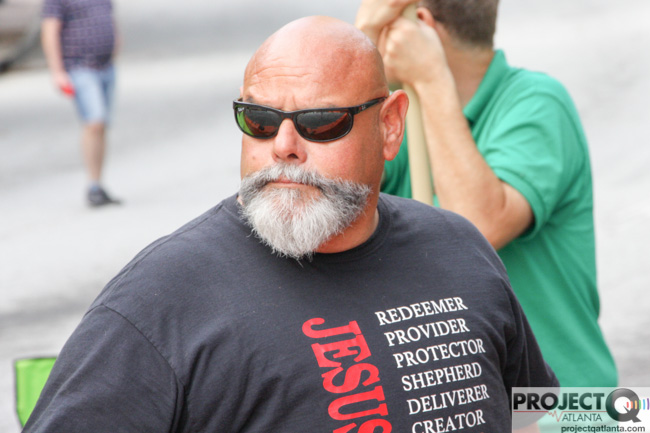 'I want to come and love my neighbor'

Scout Schultz, the LGBTQ student at Georgia Tech killed during a confrontation with campus police last month, was also a topic the protesters addressed.

Joe Justice, who works with Militant Christian Media and took part in the parade protests, said he spoke with Schultz while attending past events with the protesters at Georgia Tech.

“We’ve had interaction with that [person] that was killed by the police. So what motivated [them] to kill [themself]? Are these types of preachers provoking people to kill themselves or are they provoking them to change? I hope that they are provoking change in lifestyle, and not violence, and not self-murder,” Justice said.

Ruben Israel (second image), one of the key organizers behind the street preachers, said a love for gay people prompts them to attend Pride.

“We are here because of the gay community. And so as a Christian, I am very concerned and I want to come and love my neighbor, and that’s what we're doing,” Israel said. “Telling them the truth is an act of love. What better way to love our neighbor than to tell them they’re headed to hell if they continue in this sin?”

The definition of love certainly proved to be one of many areas of disagreement between the protesters and Pansy Patrol.

In its fifth year, Pansy Patrol is the brainchild of Tom Baker, Don Purcell and their friends. Originally conceived as a way to block the protesters, Pansy Patrol is now a non-profit. In April, HRC Atlanta honored the group for its work.

On Sunday, about 40 people split the street with protesters, carrying large, colorful flowers to help block the large signs from street preachers.

“I am all about freedom of speech, [but] this is borderline harassment and bullying,” Baker said. “We have come up with a non-violent, pro-active act of love. And we say ‘nothing more than love,’ that’s how we respond.”

Another counter-protester was Patrick Walker, who has attended Pride dressed as Jesus since 2015.

“[The protesters] are not going to be happy, I don’t think. But it’s made everybody else happy,” he added.

An Atlanta police spokesperson said the parade “went well with no major incidents.”

“The Atlanta Pride Committee, staff and volunteers worked closely with the Atlanta Police Department and our vendors to produce another successful event,” Fergerson said in an email. “From our perspective, everything with both the parade and the festival ran smoothly and we are not aware of any major incidents involving protesters.”