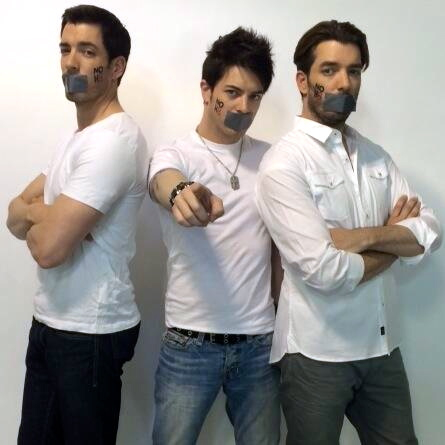 After wrapping shoots of two shows in Atlanta and running off to warmer California, Atlanta’s most recent HGTV part-timers offered up some gay-specific love that we just can’t ignore. They dropped by the Los Angeles studios of the NOH8 Campaign.

Celebs of every ilk have posed for photographer Adam Bouska's signature project in support of marriage equality and gay rights. Welcome to the party, “Property Brothers” (above).

We stripped down the handsome, hunky Scott twins, who did the NOH8 deed with their other, mostly behind the scenes brother J.D., when they were headed here for some time with their ATL gays. We’re pleased as punch to know that they embrace our LGBT fan base enough to put the duct tape where their mouth is.

NOH8 tweeted the news first on Thursday, JD retweeted, and Drew retweeted with an extra show of support for the cause. Jonathan was apparently too busy getting his hair colored to play on Twitter. Hair is a big – literally – deal to “the butch one.” Uh-huh.